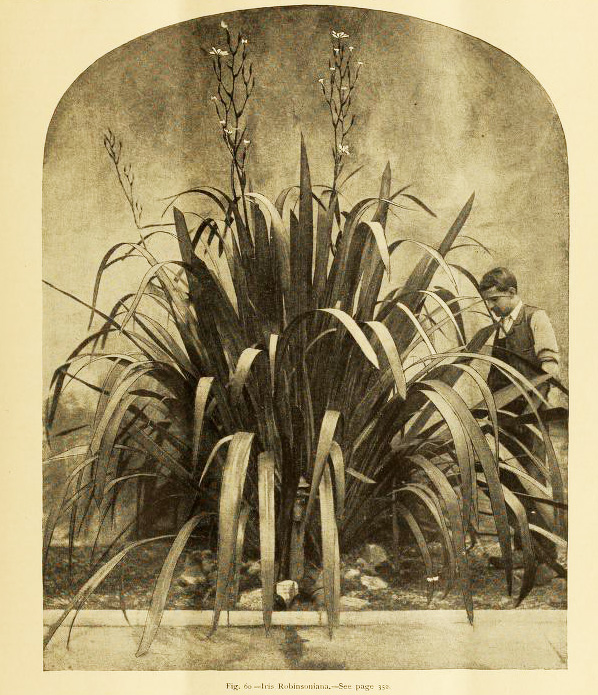 Dietes robinsoniana (F.Muell.) Klatt, Abh. Naturf. Ges. Halle 15: 374 (1882) Iris (now Dietes) Robinsoniana. — This plant was discovered in Lord Howe's Island by Charles Moore in 1869, and described by Bentham under the name of Morea Robinsoniana, but it was not until the spring of 1 89 1 that it flowered for the first time in England, at Kew. This Iris is not only noted for its exceptional size, but it is remarkable from the fact that there is no other species of the genus in the Australian continent nor anywhere nearer than China. The Kew plant was figured in this journal (vol. iv., p. 355), and we now give a picture of another plant (see p. 255), which is interesting because it is probably the first individual of the species which has bloomed in America. It is in the garden of Mr. G. P. Rixford, Secretary of the Academy of Natural Sciences in California, and is said to be sixteen years old from seed. 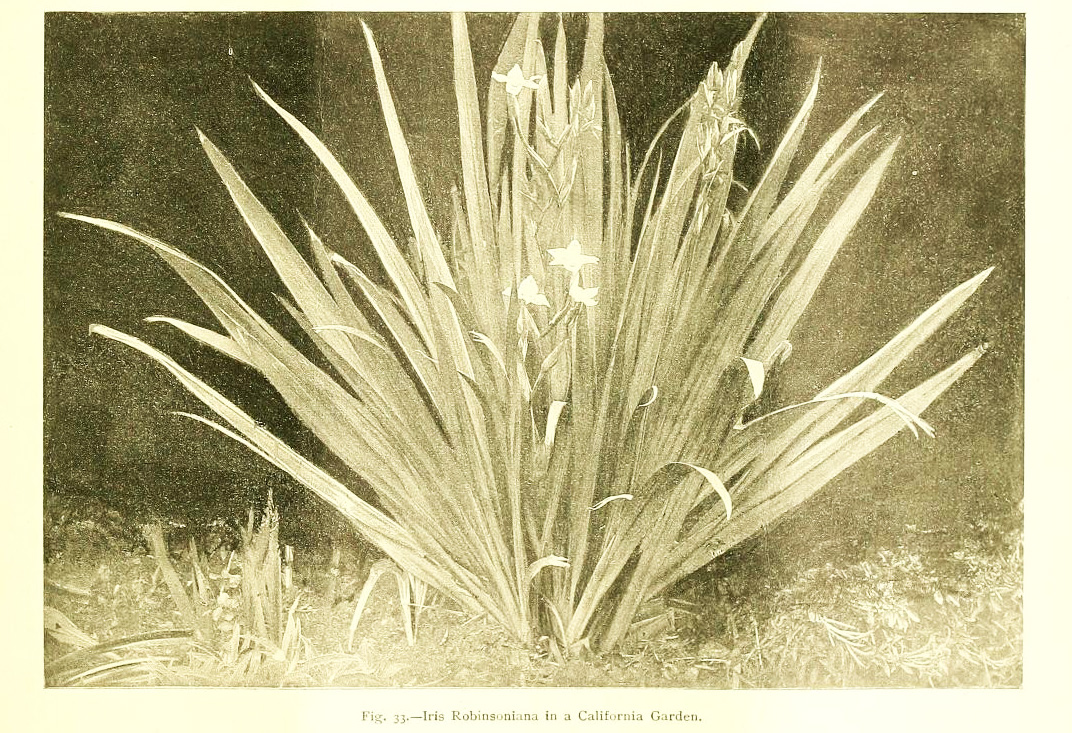 Iris Robinsoniana is a stately plant with leaves from six to eight feet long and from three to four inches wide, curving gracefully near the ends and of a healthy glaucous color. It is worth growing alone for the beauty of its foliage, which is more attractive even than that of the New Zealand Flax. The flower-scapes are six feet high to the first branches, and the individual flowers open in the morning and close permanently before night. These are four inches across when expanded and pure white, except at the base of the larger segments, where there are lines of golden yellow. Although individual flowers are so short-lived, they appear in succession for a long time, so that a single plant will bear two or three hundred flowers and continue to display them for a month. For the photograph from which our illustration has been made we are indebted to Miss Alice Eastwood, the Botanical Curator of the California Academy of Sciences. 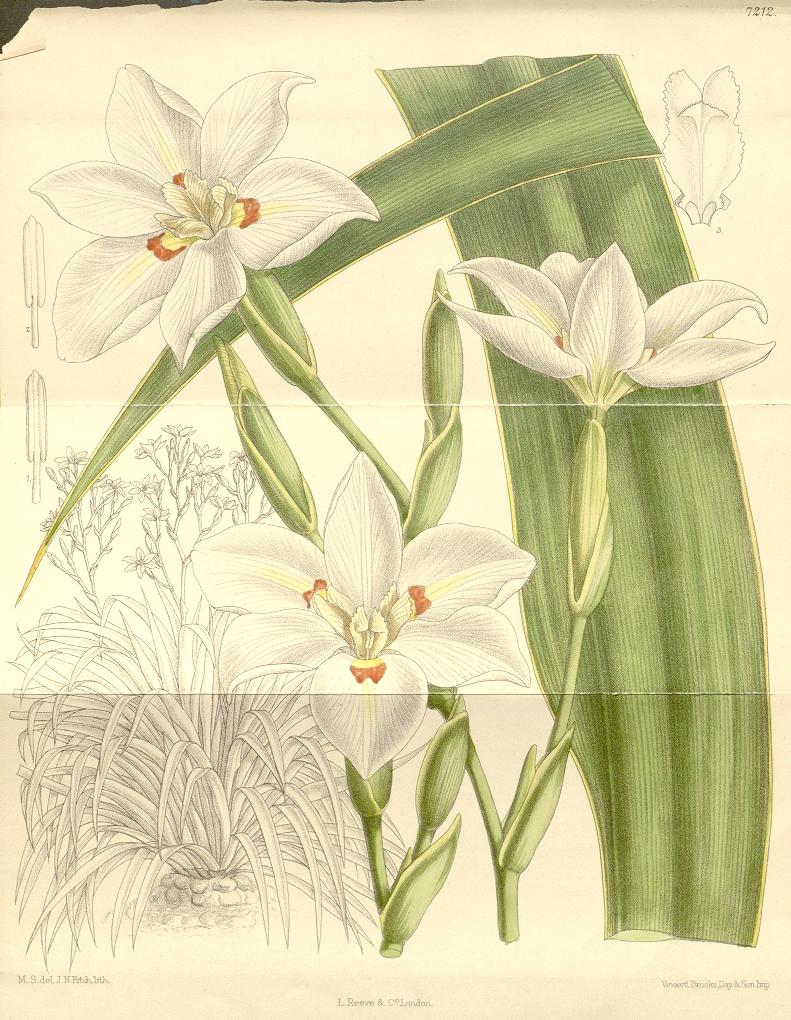 It was also figured in Botanical magazine table 7212 with th following description: Tab. 7212. Moraea robinsoniana. Native of Lord Howe's Island. Nat. Ord. Iridaceae. — Tribe Moraeae.
Genus Moraea, Linn.; {Benthum et Hooker f. Gen. PI. vol. iii. p. Moraea Robinsoniana ; elata, densissime coe.spitosa, foliis radicalibus ensiformibus longe acuminatis, pedunculo valido basi folioso paniculatim raraoso, bracteis inferioribus elongatis foliaceis acuminatis, superioribus oblongis subacutis, supremis ovarium vaginantibus, floribus amplis breviter pedicellatis albis, perianthii segmentis patentibus breviter unguiculatis e basiliberis, 3 exterioribus late ovatis obtusis basi primulinis et macula aurantiaca 2-loba notatis, 3 interioribus paullo minoribus oblongis obtusis concoloribus, filamentis liberis antbera liaeari brevioribus, connective in apionlum obtusum producto, styli ramis, late oblongis 2-lobis denticulatis, lobis rotundatis, crista brevi erosa, capsula clavata obscure hexagoaa. M. Robinsoniana, Moore & Muell, in F. Muell. Fragment, vol. vii. p. 153
Benthum Fl. Austral, vol. vi. p. 409.
Iris Robinsoniana, F. Muell, I.e. ; G. Bonn, in Gard. Chron. 1872, 393,
fig. 123, 124; Baker in Journ. Linn. Soc. xvi. (1878) 117; IF. Watson in Gard. Chron. 189] , i. 457, 459, fig. 94, 95. Perhaps the most! curious point in the history of this magnificent plant is the difficulty hitherto experienced in flowering it in Europe. The first person who called attention to its existence was the late Dr. Foulis, of Sydney, a gentleman who had resided in Lord Howe's Island, and who informed Mr. Moore, of the Sydney Botanical Gardens, and Dr. G. Bennett, of that city, that he had discovered it, and had introduced it some years previously into his garden (at Sydney) where it had died without flowering ; he further added that it was known to settlers in Lord Howe's Island as " the Wedding flower." Dr. Bennett's account of it was communicated to the Gardener's Chronicle (1872, p. 393), together with a sketch of the whole plant, and of a flower, by Mr. E. Bennett. The first botanical account of it is that contained in Mr. Moore's " Report on the Vegetation of Lord Howe's Island," dated September, 1869, where it is described as an Iridaceous plant resembling a large species of Morcea (but which would probably prove to be a new genus) with leaves six feet long by two or three inches in breadth ; a candelabra-like flowering stem six feet high, and flowers four inches in diameter ; and where it is further stated that it would be published by Baron Mueller and dedicated to Sir Hercules Robinson, K.O.M.G., Governor of New South Wales. Mr. Moore introduced the plant into the Sydney Botanical Gardens, where it flowered in December, 1871. The next accounts of its flowering are respectively in the Botanical Garden of Hakgala, in Ceylon, in 1885, under the management of Mr. Nock ; in Mr. Dorrien Smith's garden in the Scilly Islands, in 1888, and in the Royal Gardens, Kew, in June, 1891. Moraea Robinsoniana has, as will be seen by the citations under the description, been referred both to Moraea and to Iris, genera which differ but slightly in botanical characters, but most markedly in geographical distribution. Fortunately our plant is a Moraea, on both counts, for the perianth segments are sessile on the top of the ovary, and not united into a tube, as in Iris, and whereas there are no species of Iris in the Southern hemisphere, Morea is almost confined to Africa and South of the Tropics, a few species only reaching Abyssinia. M. Robinsoniana is the only extra African species, and is one of the many proofs of affinity between the Australian and the Cape Floras. he native country of M. Robinsoniana is an islet only six and a half miles long by three quarters of a mile in average width, lying between Australia and New Zealand, in Lat. 31° S., Long. 158° E., about four hundred miles east of Port Macquarie. In its vegetation the islet partakes of those of Australia, New Zealand, and the Pacific Islands, with a most remarkable predominance of endemic forms, especially of Palms, three species of which are peculiar to it. The plant figured was received at Kew from Mr. Chas. Moore, F.L.S., of the Sydney Botanical Gardens, in about 1873, and flowered for the first time on June 20th, 1891, continuing to bloom till the beginning of the following October, and having had in the interval four hundred and fifty-seven flowers, all borne by three branches of the panicle, and which remained open only one day, giving out a delicious odour. — J. D. Hooker. January 1st, 1892. Chromosome counts: 2n=20 (Goldblatt 1971, Chimphamba 1974) mm http://www.biodiversitylibrary.org/item/110703#page/371/mode/1up See below:

Your Observations Are Valued. Please make note of bud count, branching, purple based foliage and bloom time, etc. Because these are affected by climate, note date, year and geographic location and write these and other comments in the comment box below.
-- BobPries - 2013-12-12