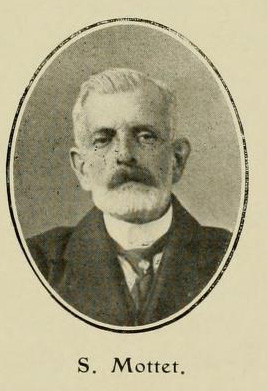 France - Paris
See: From 1939 checklist "Born in Paris, he commenced his horticultural career in 1875 and in 1880 entered the employ of Vilmorin, Andrieux et Cie, Paris. He had a deep knowledge of horticulture and botany and became one of the famous French Iris breeders. He organized the 1922 Iris Conference and was the author of many books and valuable treatises, writing continuously for many gardening papers. He was Professor of Horticulture, St. Nicholas school at Igny and was awarded the Foster Memorial Plaque in 1927. He was also named "Officier du Merite Agricole: and Officier d'Academie." Some splendid Irises were produced in his time, 'Alcazar' being perhaps the best known over the longest time." "Seraphin Mottet was not just another nurseryman or iris breeder. He was widely regarded as one of the two or three most knowledgeable authorities on irises in the world. He grew both HONORABILE and SANS SOUCI for the firm Vilmorin-Andrieux et Cie. In the article "Classification des Variétiés d'Iris des Jardins in Les Iris Cultivés, which was published in 1923, Mottet proposed a new system for classifying garden irises based on color.
You can check out the Color Classification chart mentioned here at the end of the 1929 Checklist Introduction posted in the Reading Room Mottet's system had eight color classes with subclasses. Mottet's Class VII was for variegata-type irises. The first two subclasses in Class VII were for irises with pale yellow standards. One of these subclasses was for irises with pale yellow standards an falls with distinct veins, and as example given by Mottet was GRACCHUS. The second subclass described irises with pale yellow standards and solid-colored falls. Mottet cited LORELEY as an iris belonging to this subclass.
The third subclass of Mottet's Class VII was for irises with dark yellow standards and distinctly veined falls. Mottet assigned SANS SOUCI to this subclass. Mottet placed HONORABILE in his fourth subclass for irises with dark yellow standards and solid-colored falls. Thus, according to Mottet, the distinguishing color characteristic of SANS SOUCI and HONORABILE is whether the falls have distinct veins or whether they are solid-colored. If the falls have veining, the iris is SANS SOUCI." [Clarence Mahan, The Iris That Lost Its Name] A remembrance article by F. Lesourd may be found in the AIS Bulletin #36(July 1930), pp 12-14.