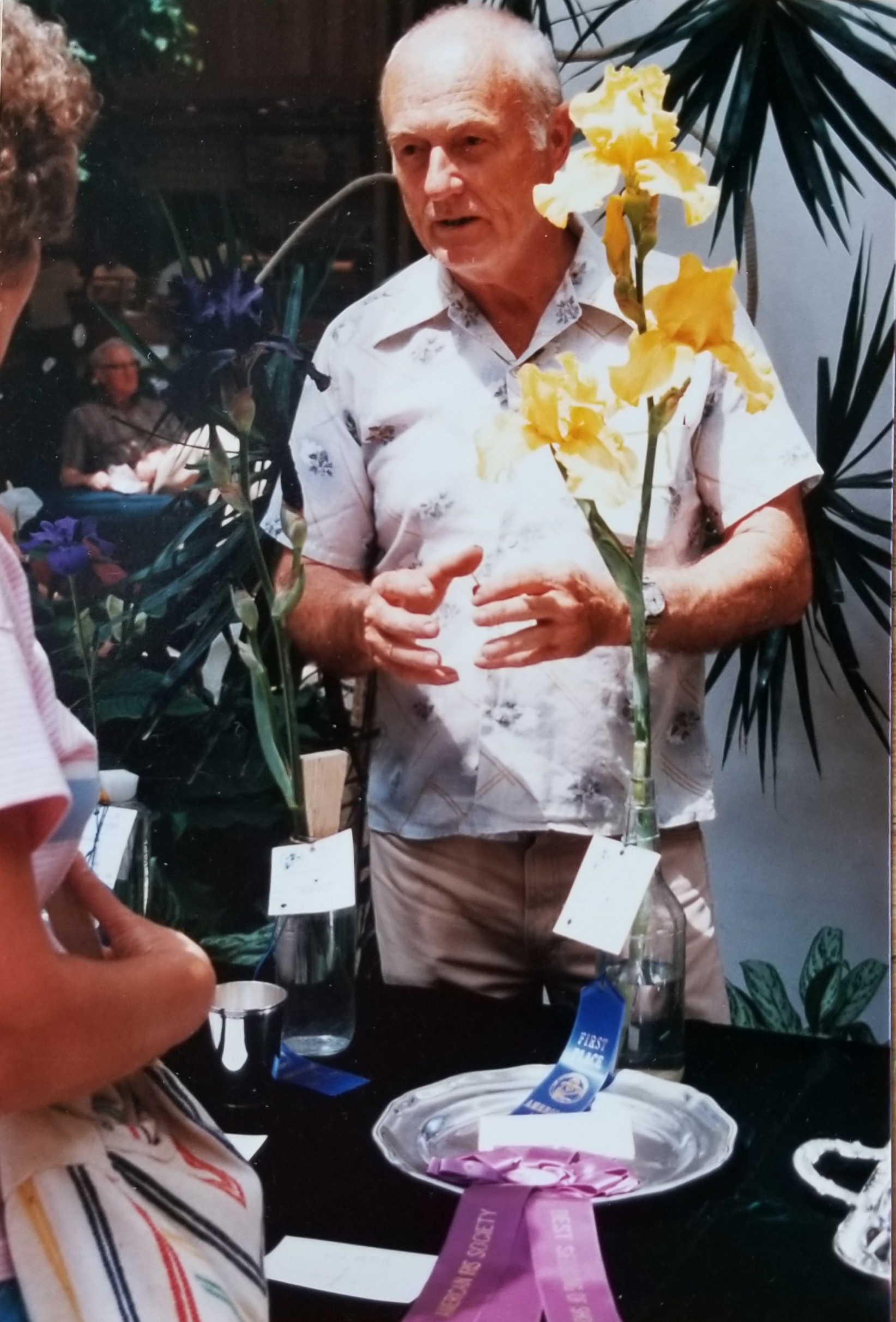 Each spring, eight-year-old Edwin Roberts enjoyed his eight mile walk to the movies every Saturday because the sides of the road were lined with wild, purple iris, commonly called flags. Throughout his life, his love of iris never wavered. He married at 18 and began buying and growing iris. When he was twenty-nine, he hybridized and introduced his first two iris: “Enchanted Isle” and “Haunting Melody.” After fathering six children and going through a divorce, he moved to Frankfort, Kentucky where he had been born and reared. He remarried and produced one daughter. Through the years, he hybridized many beautiful blooms and enjoyed taking his special iris and seedlings to the Bluegrass Iris Society iris show in Lexington under the name Ed Roberts. He earned so many silver bowls and blue ribbons that he turned the ribbons back in. A daughter named Lucy whom he had not seen or heard from since she was nine years old, visited him in Frankfort. He was thrilled to see her and named one of his seedlings “Lucy’s Pride.” It had won best seedling in the show the previous year. The following year, he took it to the show where it won the highest award - “Queen of the Show.” Lucy’s Pride is bright yellow and ruffled. He named another large, yellow iris “Lucy’s Child.” Ed Roberts named and introduced a total of thirty-three iris; that number could have been much larger, but he was very particular regarding branching and color. In 2004 he was awarded 'Hybridizer of the Year' by AIS Region 7. I am proud of my dad’s accomplishments and enjoy growing iris as well as hunting for his varieties that I do not have. (submitted by Lucy Roberts-Krausse) Registrations/Introductions: Border Bearded: 'Bold Defender', 'Last Bid'. Tall Bearded: 'American Style', 'Blueberry Frost', 'Bold Arrangement', 'Born A King', 'Detroit City', 'Easter Clouds', 'Edge Of Eden', 'Ellen Alexander', 'Enchanted Isle', 'Evelyn Joyce', 'Five Star Final', 'Glorious Review', 'Gold Kingdom', 'Haunting Melody', 'High Conquest', 'High Tribute', 'Holiday Magic', 'Lucy's Child', 'Lucy's Pride', 'Most Stunning', 'Return To Eden', 'Royal Conquest', 'Silent Force', 'Silver Skates', 'Song Of Valor', 'Star Passion', 'Stardust Road', 'Susquehanna', 'Symbol Of Pride', 'True Valor', 'Volcanic Fire'. -- Main.RPries - 2012-05-18