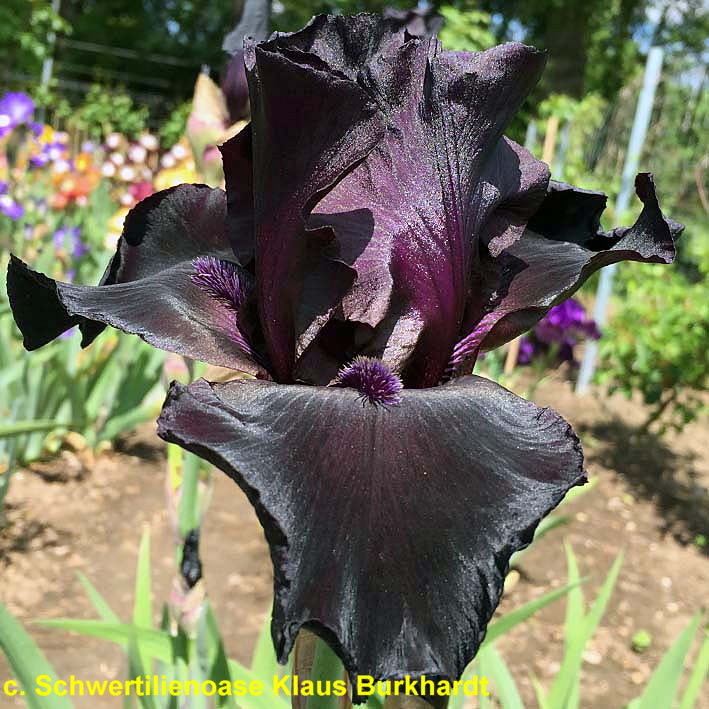 The information include within this page and its links captures the various awards and recognition presented by the American Iris Society (AIS) for this particular year. Annual Garden Awards of AIS are the results of accredited judges’ evaluations of garden grown irises seen by the judges and voted on. The pages and linked documents summarize the results and the AIS Garden Awards thus bestowed on iris for this award year. Annual popularity recognitions, Convention Cups, also summarized here, are voted on by the AIS National Convention attendees having visited the convention tour gardens as part of each annual AIS National Convention. The awards and recognitions that are summarized by the pages and documents here, and from other years, are also recorded in each iris’ cultivar page. 'Before The Storm', a Tall Bearded Iris, photo on the right, is the 1996 American Dykes Medal winner, the highest award annually voted by American Iris Society judges. The 1996 AIS Awards were published in the October 1996 Bulletin, pp 77-82. The 1996 Japanese Awards were published in the January 1997 Bulletin, page 58. The 1996 Franklin Cook Cup and President's Cup winners published in the July 1996 Bulletin, page 86. The Walther Cup winners list. The Franklin Cook Cup winners list. The President's Cup winners list. The 1996 High Commendation winners published in the July 1997 Bulletin, page 69. The 1996 High Commendations with links to each of the iris. The 1996 National Convention Favorite Guest Iris in the January 1997 Bulletin, page 70. The 1996 Favorite Guest Iris with links to each of the iris. This version of the 1996 AIS Awards includes links to each of the Iris in the awards list. If you find errors in these linked lists please contact Doug Chyz. Contact information for Doug can be found on the AIS Leadership page (Doug is an AIS Director among other positions).
Number of topics: 0