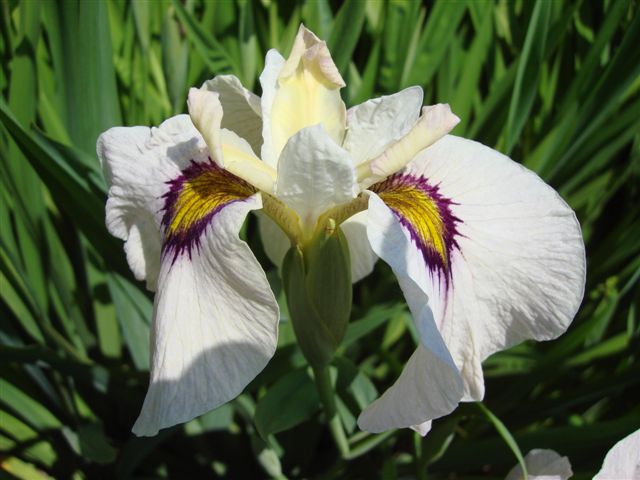 Definition "Pseudata" is the term for an iris resulting from a cross of I. pseudacorus X I. ensata. Modern varieties are typically 30"-45" tall and strong-growing plants with multiple flowers per stalk. Many exhibit a strong "eyelash" pattern in their signal. Development Hybridizers have been interested in pursuing such a cross for three main reasons: * to bring yellow elements into the spectrum of Japanese irises (JIs) * to breed JI-like plants with less restrictive cultural requirements than JIs * to breed robust plants with high bud counts and attractive JI-like flowers In addition, since some of these crosses generally result in sterile hybrids, there is no danger of such plants becoming invasive, as is possible with I. pseudacorus. Pioneering work done by Osugi and Ueki succeeded in the first goal, with Aichi no Kagayaki (1962) and Kimboshi (1971). Both have forms similar to JIs, but have foliage that is yellow-green. Chance Beauty (Ellis, r. 1988) is a pseudata with green foliage. It has been analyzed to have two sets of I. pseudacorus chromosomes and one set of I. ensata chromosomes. Jill Copeland introduced Pixie Won in 1997 as another development, aiming toward the second and third goals. It has small red-violet flowers which contrast well with the yellow-green foliage. Hiroshi Shimizu made a major step forward with his use of Gubijin (2005) as a pod parent. This I. pseudacorus variety has a 2n=35 chromosome count, and readily crosses with Japanese irises to grow pseudatas with strong green foliage. Some of these pseudatas are the following: Kinshikou, Byakuya no Kuni, Ryugan, Tsukiyono, Okagami, Shirabyoshi, Shiryukyo, Take no Sato, Samon and several other later introductions, all from mixed JI pollen. John Coble, Chad Harris, Tomas Tamberg, and Hiroshi Shimizu himself have now been following this line with specific JI parents. Jill Copeland has also used a child of Gubijin as a pod parent of Alabama Blue Fin. Jill Copeland demonstrated that seedlings from Chance Beauty crossed with a JI can produce yellow-green or green foliage, e.g., Lemony Snicket, with two sets of I. pseudacorus and one set of I. ensata chromosomes . Another goal is to develop fertile pseudatas. Presumably the current chromosome count is 29, and the tetraploid count would be 58. Ohayo Gozaimasu (Ackerman, 2003) is such an achievement, with two sets of I. pseudacorus and two sets of I. ensata chromosomes. Jill Copeland has successfully crossed it with I. pseudacorus to obtain fertile, green-foliage pseudatas with three sets of I. pseudacorus and one set of I. ensata chromosomes. Tomas Tamberg is working in this direction as well. Culture Modern pseudatas grow in ordinary garden conditions or in the perennial border. They require ample moisture, especially when they are transplanted. Good culture will increase height, branching, flower size, and quantity of bloom. These irises will grow and bloom better if planted in full sun. Beardless irises prefer a rich soil with ample organic matter. If the soil is clay, the addition of organic matter will help to loosen it. If the soil is more sandy, the organic matter will help in water retention as well as adding nutrients. Depending on what is available, till in ample amounts of manure, hay, straw, peat moss, etc. If using hay or straw you may need to add high nitrogen fertilizer to compensate for the nitrogen tied up in the decomposition process. If your pH is too high, it can be lowered by the addition of granular ferrous sulfate, aluminum sulfate, or agricultural sulfur. Plant strong divisions of at least 2 to 3 fans. Small divisions take longer to get started and are more subject to loss. The roots should at no time be allowed to dry out during transplanting. Planting in a small depression (1-3 inches below the average soil level) will help the plant receive extra water during rains. In northern areas, avoid planting in areas where prolonged cover of ice may smother the plants. After planting keep well watered until the plant is established and new growth begins to appear. A heavy mulch helps to conserve moisture as well as reduce weeds. If plants are set out in the fall, a mulch is needed to prevent heaving over winter. Although pseudatas are somewhat drought-tolerant, they, especially in areas with hot dry summers, benefit from regular watering; some growers have found soaker hoses helpful. Plants that are irrigated become dependent on irrigation and will require it if transplanted. Plants should be divided every three or four years or when overcrowded and amount of bloom is reduced. Pseudatas can be transplanted almost anytime from spring until fall, but shortly after bloom period or fall is probably the best. New roots should have sufficient time to anchor the plant before winter freezes. Plants moved or divided in the summer must have plenty of water and some light shade in hotter climates. Pseudatas are heavy feeders. .A liberal application of a balanced fertilizer, such as 10-10-10, in spring and just after bloom is beneficial. Foliar feeding with such things as "Miracid" will help weak plants to grow better. Do not fertilize if planting in late fall. This forces growth in warm spells during the winter. Iris borers found in some parts of the country will sometimes attack beardless irises but prefer to dine on bearded types. Check with local growers for newer methods of control. Dead foliage should be removed in early winter or early spring. Bloomstalks should be removed after the last flower has faded. Sources: Jill Copeland, "What are Pseudatas?", Bulletin of the American Iris Society. October, 2009. Jill Copeland, "Update on X-pseudatas", SIGNA, No. 95, Summer, 2017. Tomas Tamberg Carol Warner -- Main.RPries - 2010-06-15
Edit  | Attach | Print version | History: r14 < r13 < r12 < r11 | Backlinks | View wiki text | Edit wiki text | More topic actions
Topic revision: r14 - 25 Oct 2017, wilsonjh
Main
________________________________
Administration