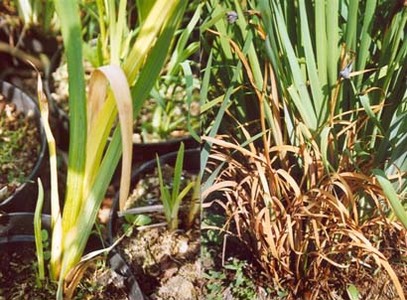 SCORCH is a disease of unknown origin that makes an iris extremely sick. Generally the first apparent symptom is the brownish-yellow color of the center leaf in the fan. If this leaf resists being pulled out and the scorched appearance spreads to adjacent leaves, chances are that the plant has scorch. If the scorched plant is dug, the root system will appear to have disintegrated. Scorch occurs most often after mild winters in cold climates. It seems to be the result of stress that occurs when plants grow when they shouldn't. There are few preventative measures and no known measure is fully certain. In cold climates, mulch to keep the soil around the roots frozen during winter thaws. Time the application of fertilizer so that it is available to the iris during its maximum growth periods rather than when the plant should be dormant. In a 1971 publication that was not well known, Scorch Disease of Rhizomatous Iris by J. C. Bald implicated the Pseudomonas bacterium which causes scale tip rot of lilies. More recent work did not support the earlier conclusion: Pathogenicity of Pseudomonas gladioli pv. gladioli on Rhizomatous Iris and Its Possible Role in Iris Scorch by A. I. Wrobel, J. E. Watkins, and D. H. Steinegger, 1992. -- Main.RPries - 2010-10-13