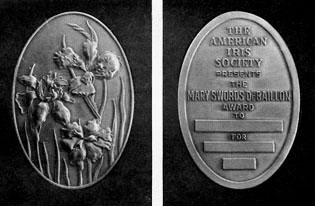 This medal is restricted to Louisiana (LA) irises. It is named in honor of Mary Swords DeBaillon (1888-1940).

Mary Swords DeBaillon was born in Opelousas, Louisiana, and she lived in Louisiana all her life. She and her husband, Dan DeBaillon, lived on a fifteen-acre tract 5 miles from Lafayette, Louisiana. She transformed the grounds of her home into a garden renowned for its exquisite beauty and its large collection of native Louisiana plants. She had been growing a few native irises when, in 1932, she visited Caroline Dorman's home, "Briarwood" and saw the large collection of different forms of Hexagonae irises blooming in the garden. Mary DeBaillon realized how varied these irises were and what lovely garden plants they were. She then set out to collect every form of Louisiana's native irises that she could find.

Mary DeBaillon amassed the largest collection of Louisiana irises in the world. She was tireless in promoting these irises as good garden plants and in encouraging any who would listen to grow them. She gained considerable fame as a naturalist and native plant collector. She encouraged collection of the indigenous iris species to save them as civilization encroached on the swamps and bayous. A year after her death the iris enthusiasts in Lafayette organized an iris society and named it the Mary Swords DeBaillon Iris Society. This society became the Louisiana Iris Society in 1948.

The highest award an LA could receive from 1948 until 1985 was the Mary Swords DeBaillon Award. During that period, SLI was an independent unit with no affiliation whatsoever with the American Iris Society (AIS). SLI became a Cooperating Organization of AIS in 1986.

After that date the AWARD was discontinued and replaced with the Mary Swords DeBallion MEDAL, the highest award exclusively for Louisiana Iris. The MEDAL is a part of the AIS award system. All AIS medalists, including the Debaillon medalist, are elegible for the Dykes Medal, the highest award presented by AIS.