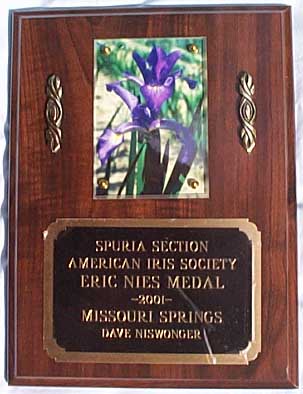 The Eric Nies Medal is the highest American Iris Society award given strictly to a spuria Iris. The Eric Nies Medal is actually a plaque. Legend has it that Ben Hager, who had won almost every medal possible, complained that they all went into a drawer and the he wished he had something to hang on his wall. The Spuria Society fulfilled his dream.

Eric Nies was born in Saugatuck, Michigan, the son of Dutch immigrants. He graduated with a BS degree from Michigan State College, where he was a star pitcher on the baseball team. In 1913, he and his wife Grace moved to Los Angeles, California, where he taught high school botany and agriculture for many years. He was a man who was praised for his beautiful singing voice, his wit and his charm.

Soon after Nies moved to California, he became interested in irises of all types. He obtained his first spuria irises from Jennett Dean, who operated one of the first iris specialist nurseries in the U.S. Spurias were his special interest. His first cross was with I. orientalis with 'Monspur'. He interbred seedlings from this cross, and in the second generation there was a virtual explosion of color: blue, lavender, brown, bronze and cream. Some of these early cultivars, the forerunners of great advances in spuria irises, are 'Bronzspur', 'Saugatuck', and 'Azure Dawn'.

Even during his lifetime, Nies was recognized as the foremost breeder of spuria irises in the world. Marion Walker took over his seedlings and breeding lines after he died in 1952. One of the Nies cultivars introduced by Walker is 'Driftwood', which is chocolate-brown with a gold flush. It won the Nies Award in 1959. List of Eric Nies Medal winners - Spuria (SPU) Irises: List of Eric Nies Award winners - Spuria (SPU) Irises: In 1993 the first Eric Nies Medal was awarded, Previously the Eric Nies Award was equivalent to an Award of Merit. Note that most classifications within the AIS Awards System began with Award of Merit (AM) equivalent Awards, later elevated to Medal status. At this transition, previous Award winners from a specified period of time re-competed for the higher Medal honors. Thus there are some duplicate entries (*) . -- Main.RPries - 2009-10-14