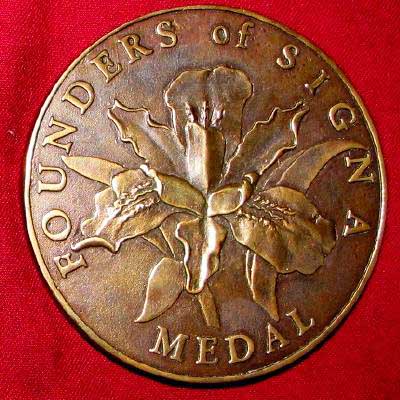 This medal is restricted to species irises (SPEC) and is named to honor the founding members of the Species Iris Group of North American (SIGNA).

The first issue of SIGNA, published in April 1968, lists forty charter members of the Species Iris Group of North America. The first organization meeting was held in May 1966. Roy Davidson was subsequently elected chairman of the new group and Betty Rowe was elected secretary/treasurer. Bruce Richardson became the first editor; Thomas J. Buckley was designated librarian; and Ruth Hardy agreed to take on duties as seed exchange director.

One of the first acts of the new group was to publish the Species Iris Study Manual. The success of the organization in its formative years was to a considerable degree the result of the leadership skills of Roy Davidson and the editorial work of Bruce Richardson.

Around 1990 there was considerable discusion concerning the AIS awards system. Some felt that tall-bearded Irises were not represented commensurate with their great numbers. At the same time the Judges Handbook had chapters on all types of Irises, including species. But there were no awards for species so garden judging species was superfluous. Members of SIGNA felt that certainly there was enough variation within most species that choosing the best varieties for the garden merited attention. The president of SIGNA, Colin Rigby assigned Robert Pries to chair a blue ribbon panel to decide how to go about creating a garden award for Species and/or Species hybrids. Members of the panel included Ben Hager, Currier McEwen, and Francesca Thoolan. They came up with the recommendation for two awards, The Founders of SIGNA Medal and the Randolph-Perry Medal for Species Crosses.

The recommendation came to the board in 1992 at the same time as the complete revision of the awards system was taking place. These two awards completed the system in that no Iris was left out of the system by not being included in a classification. The Tall-bearded Irises were provided 3 Wister Medals and most people felt the system had become more complete and fairly balanced. The Species award and the Species Cross award covered all irises but hybridizers were asked to choose between one of these or one of the pre-existing classes based on what they felt best represented the iris. For example a collected variation of a japanese iris would most likely be put into the Species class but technically all Japanese Irises are the species Iris ensata and theoretically could have been included in the Japanese class if it seemed advanced for its species.