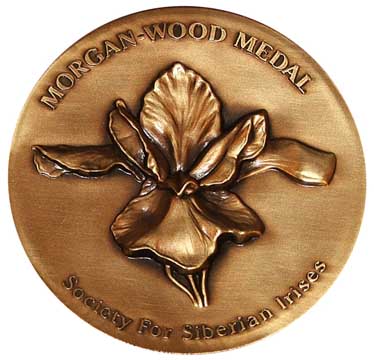 F. Cleveland Morgan was a pioneer Canadian breeder of Siberian irises and a founding member of AIS. Some of his magnificent cultivars still enhance gardens around the globe. Three of his best known irises are 'Caezar', 'Caezar's Brother' and Tropic Night'. Educated in England and Switzerland, he was a director of the Henry Morgan Company and a patron of Canadian arts. Morgan's association with the Montreal Museum of Fine Arts spanned a period of forty-five years, including 8 years as president of that institution. The museum held a special exhibition in 1961 to display more than six hundred works of art that he had donated.

AIS instituted the Morgan Award for Siberian Irises, the predecessor to the Morgan-Wood Medal, in 1951.

Ira E. Wood, who was known as Sandy to his friends, and his wife Betty were both scientists who worked for Bell Telephone Laboratories in New Jersey. They shared their iris hobby and were active in the activities of AIS and the Society for Siberian Irises. They often undertook iris society projects as a team and one of these was the production of the Handbook for the American Iris Society Members and Officers. The AIS awarded them both the Distinguished Service Medal in 1974.

Wood hybridized Siberian irises, but he introduced only one cultivar 'Ong's Hat.' He also served as a director of AIS and as its second vice president.