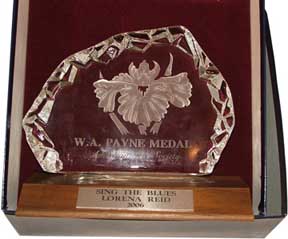 The highest award given by the American Iris Society strictly to Japanese Irises. 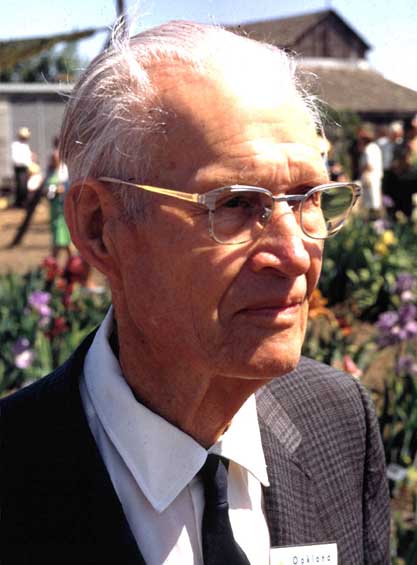 W. Arlie Payne was born on a farm near Terre Haute, Indiana. He graduated from Central Normal Collage in Danville, Indiana, and studied pattern making. Payne worked as a lumberjack, photographer, real estate agent, and pattern maker until he established a landscaping business on sixteen acres of land south of Terre Haute. He was at first especially interested in peonies, but in the late 1920's, he "discovered" Japanese irises. He started hybridizing Japanese in irises in 1932. Over the next three and a half decades, he raised many thousands of seedlings.

During the 1930's and .1940's, there was a sharp decline in the popularity of Japanese irises in the United States, especially during the period of WW II. One of the few nurseries on the West Coast that continued to offer them for sale renamed them "Pearl Harbor irises." Arlie Payne continued his, extensive breeding program striving to produce "a race suitable for outdoor American plants." He sought a beautiful flower of symmetrical form and a plant that demonstrated exceptional vigor. One of the most exceptional aspects of his breeding program was that it was developed in the early years using only six cultivars of the Edo type. Payne took line breeding to a new level of intensity.

Arlie Payne did not start introducing his irises until the early 1950's. When he did, it was apparent that he had developed a strain of wonderful new Japanese irises. He ultimately registered 170 cultivars, most of which were of exceptional quality. When his new cultivars were sent to Japan, the Japanese were astonished to see their diversity and quality. The gigantic maroon, 3-fall cultivar 'The Great Mogul' (1958) was especially admired by Japanese specialists. Payne cultivars took the Gold, Silver and Bronze Medals in the Internationale Garten Ausstellug in 1963. 'The Great Mogul' won the Silver Medal at the Vienna Intenationale Gartenschaus in 1964, and 'Confetti Shower' won the Bronze Medal at the same event.

The American Iris Society awarded Arlie Payne its coveted Hybridizers Medal in 1964. When he died at the age of 90, in 1971, he was universally revered as the world's premier breeder of Japanese irises.

From the Society for Japanese Irises (SJI):