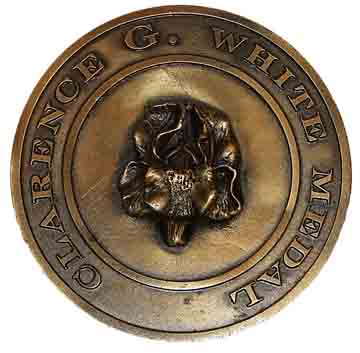 Clarence G. White was born in Cleveland, Ohio. After attending Harvard University, he worked for the White Sewing Machine Company, which had been founded by his father. Later he operated his family's plantation in Florida. His experiments with potato growing in Florida have been credited with being the basis for establishing the potato business in that state. He moved to Hawaii in 1905, and there he owned and operated a large pineapple plantation. He was involved in many philanthropies and civic activities. He moved his family to Redlands, California in 1919, and he began raising flowers and extending his works of civic philanthropy. It was at this time that White developed an interest in and irises.

When Clarence G. White began his work with aril irises, little was known about the complexity of iris genetics. White assembled the largest collection of aril irises in the world, and conducted thousands of breeding experiments to obtain viable, fertile seedlings. One of his goals was to develop strong, pure Oncocylus hybrids. Tom Craig wrote this of him in 1958: "He contributed so much to the interest in Aril Iris that his name above all others is associated with them. For twenty-five years, Clarence White and his work have rightly been the starting point for anyone wishing to explore the field of growing and hybridizing Arils."

White's hybrids, such as 'Oyez', 'Some Love', and 'Nelson of Hilly', were almost the only Oncobreds listed in catalogues for many years. He coined the vocabulary used by aril iris hybridizers, and is universally regarded as the pioneer in this field.