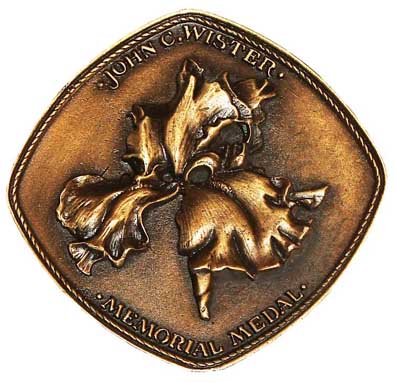 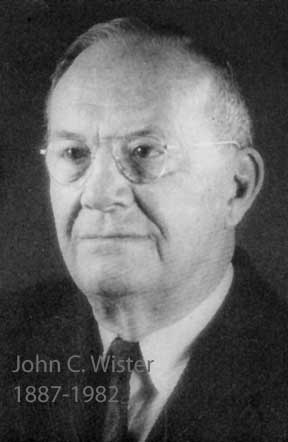 John C. Wister led the organizing meeting that created the American Iris Society and became its first president, a position he held for fourteen years. He guided the society through its formative years. He was widely recognized as a man of rare management skill, leadership ability, and the highest ethical standards. R. S. Sturtevant wrote of him: "Probably few current members realize that the AIS started through the efforts and initiative of one man, John C. Wister...."

During a visit to England in 1922, Wister encouraged his many English friends to establish the British Iris Society. His contribution to the founding of the British Iris Society was formally recognized by his election as an Honorary Member and the award of the Foster Memorial Plaque. The American Iris Society awarded John Wister the Gold Medal in 1930, stating: "All Iris growers in America recognize Mr. Wister as their leader and will certainly approve the action of the Board of Directors in conferring upon him the highest recognition in their power to bestow." 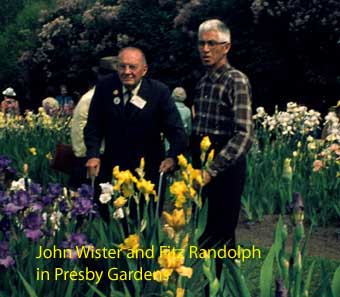 John Wister was the author of four books: The Iris, Lilac Culture, Bulbs for American Gardens, and Four Seasons in Your Garden. He was the first to receive four major American horticultural awards: The Liberty Hyde Bailey Medal presented by the American Horticultural Council; the Scott Garden and Horticultural Award; the American Peony Society's A. P. Saunders Memorial Medal; and the Honor and Achievement Award of the International Lilac Society. The Brooklyn Botanic Garden presented him its Garden Medal in 1966, and that same year the Royal Horticultural Society dedicated its Daffodil and Tulip Yearbook to him, the first time an American had been so honored.

Wister was a landscape architect. He graduated from Harvard University and studied at the Harvard School of Landscape Architecture and the New Jersey Agricultural College. He served in Europe during WW I, and in his spare time visited gardens and leading horticulturists. He was secretary of the American Rose Society for many years, and was a member of some fifty horticultural societies and thirty scientific and conservation organizations. He was the first director of the Arthur Hoyt Horticultural Foundation, and designed and created the 240-acre public garden at Swarthmore College.

One of John C. Wister's endearing qualities was his modesty. He always denied that he was the founder of the American Iris Society, saying that it was the work of many people. Of himself, he said: "But I know I'm just an ordinary fellow who happened to come along at the right time." An ordinary fellow he was not. We all owe him a great debt of gratitude. John C. Wister, to a remarkable degree, created the American Iris Society's traditions.

All the other iris categories award only one medal for each year. The exception is this category, the very popular Tall Bearded (TB) iris category. There are three Wister Medals awarded each year beginning in 1998 when the number was increased. Only AIS registered judges may vote.