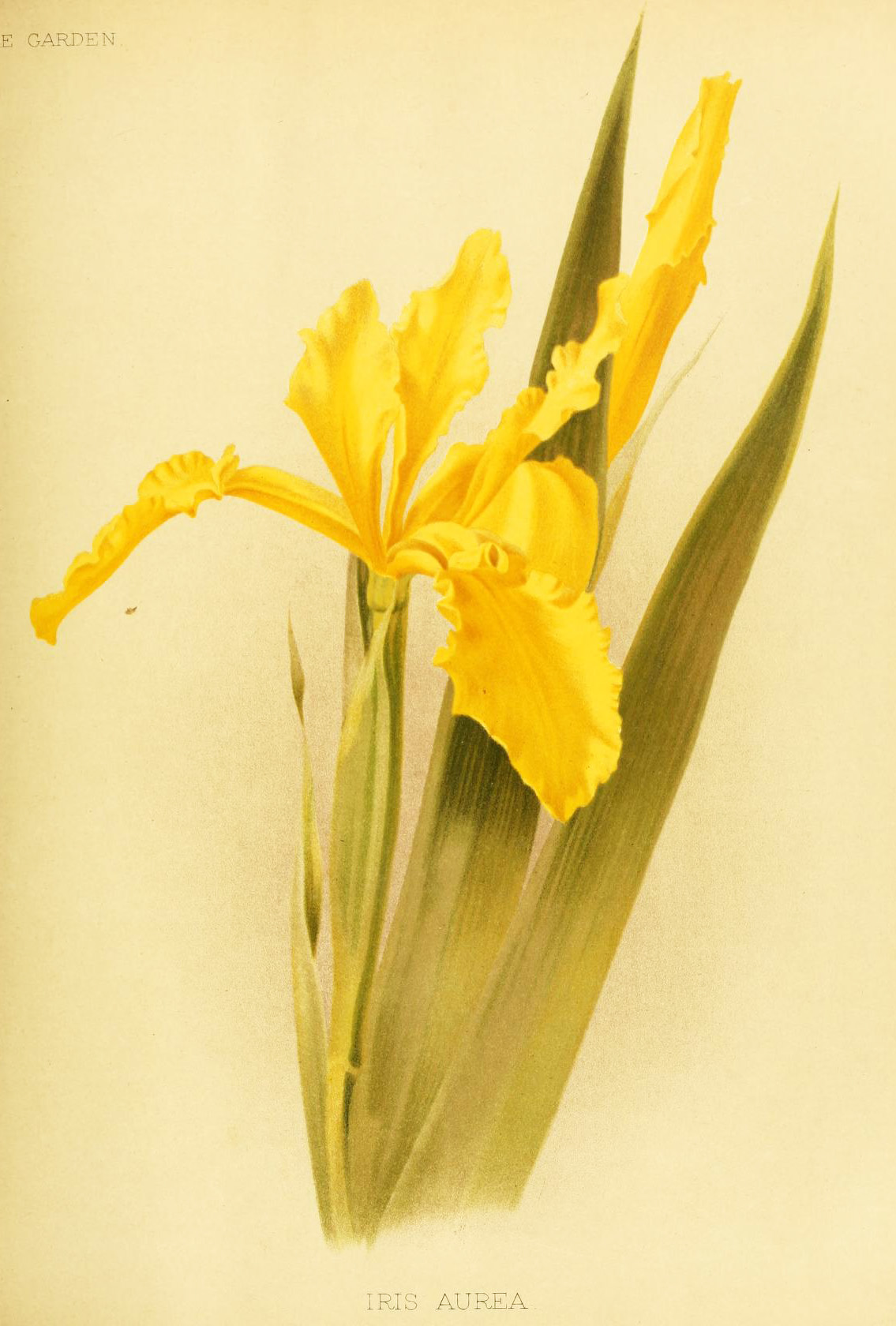 1847, Lindley Iris aurea (John Lindley, 1847) originally published in Edwards's Botanical Register; 33: t. 59.1847 In ; Garden Flora. PLATE 679. IRIS AUREA.
This stately, late -flowering, golden -yellow, beardless Iris is a native of Cashmere. It was first described by Lindley (Botanical Register t. 59) after plants raised from seed brought by Royle from that country, and was a few years ago re-introduced into cultivation by Dr. Aitchison, who found it growing near Shrinuggur, in the same country. I am not aware of any habitat outside Cashmere having been recorded. It possesses all those marked general features which characterise the spuria group of Irises (1. spuria, notha, Gueldenstadtii, ochroleuca, Monnieri, &c.). Thus, the rhizome is hard and compact rather than fleshy, and the terminal bud gives a piece of the rhizome when dried the appearance not unlike tliat of the not too curved rough end of a walking-stick ; the tall leaves, somewhat narrow, 4 feet or more in length, are strong, stiff, and pointed, and die down completely in winter ; the strong and stiff, but relatively thin, tall scape bears a terminal bud of two or sometime? three flowers, compressed within the long, stiff, spathe \'alves, so that there is hardly room for the two flowers to expand together, and also bears a similar lateral bud ; the flower is beardless, rigid ; the fall, with a narrow claw separated by a notch from the wider blade, spreads horizontally, the style being closely pressed down over the claw of the fall so as to leave a very narrow, almost perfect, tunnel down to the nectary, while the somewhat narrow standards are erect or slightly connivent ; the ripe capsule is large, oblong, more or less beaked, with three conspicuous longitudinal ridges, each of which is double ; the seeds, which are numerous, are compressed into discs (except the upper and lower one in each loculus, which are conical or pyriform), and possess very loose, wrinkled, white, grey, pink, or sometimes black coats.
All the various members of the spuria group possess these characters, and the question may be raised whether they do not really form one species ; but I. aurea may be at once distinguished by the golden yellow colour of all parts of the flower, and by the blade of the fall being a long oval with peculiarly crimped edges. In I. Monnieri, to which I. aurea comes nearest, the blade of the fall is a more rounded oval ' with even edges ; the whole flower is of a paler yellow, more nearly of a lemon-yellow, and the flower, spathe- valves, and foliage are all larger and broader. In the other members of the group the flower is white, blue, or purple, or at best a dingy yellow, and in I. spuria and I. Glildenstiidtii the flower is smaller and narrower, as indeed is the whole plant. Like nearly all the spuria group, I. aurea seems to me to do best in rich, fat, damp, somewhat stiff soil, but it will also flourish in lighter soil if adequately damp, and will thrive in places far too ihy for the 1. virginica group or for 1. Pseudacorus. It will repay with bloom rich feeding, provided that the manure be adequately rotten and digestible ; and for the full development of its beauty full sunshine is needed. I imagine that in cold climates it will not do so well in an actual peaty bog as in damp, though not absolutely wet, rich loam ; but on this point I cannot speak from experience.
It flowers late in the summer, about the same time as or a little after I. Kaempferi, and a little before I. monnieri. It bears transplantation at almost any time, but is best moved immediately after flowering ; for though the foliage may die down owing to removal, the autumn rains stir up the rhizome to send out new roots, and indeed new foliage, so that it gets firmly established before the hand of winter is upon it, and consequently starts vigorously in the spring. Seeds sown as soon as ripe, in October for instance, will geiminate freely the next year, and the seedlings will flower freely in the third or fourth year, sometimes in their second year.
The flowers open well when a spike is cut in the bud, and being stout last a good while. Hence the plant may be made very useful for decorative purposes. M. Foster.
Drawn for The Garden in M. Godofroy-Lobeuf's garden Argenteuil