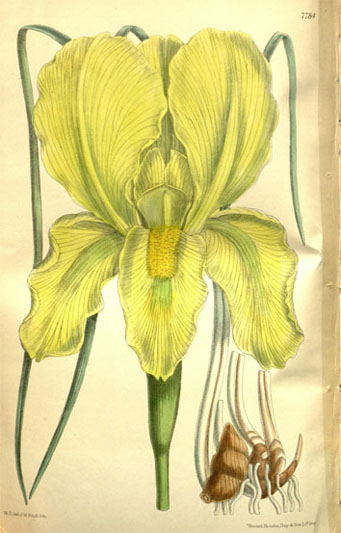 1901, Baker Iris chrysantha (John Gilbert Baker, 1901) in Bot. Mag. 127: t. 7784. 1901; Synonym Iris barnumae subspecies barnumae f. urmiensis (Hoog) Mathew & Wendelbo Baker provided the following note with Table 7784:
"This fine species of Iris belongs to the section Pogoniris, and is easily distinguished from the species already known by its narrow leaves, long peduncle with a single cluster of flowers, large spathe-valves and large, pale yellow flower, with a short tube. Its native country is rather uncertain. Kew received it from Mr. R.I. Lynch of Cambridge Botanic Garden, with whom it flowered last June. He received it from Mr. C. G. Van Tubergen, Jr., of the Zwanenburg Nurseries, Haarlem, under the name of Oncocyclus species. Mr. Van Tubergen has not himself flowered it, and it seems likely it was introduced accidentally, along with a fine new species of the Oncocyclus section, which he has lately distributed under the name of Iris urmiensis, and which was collected in the neighborhood of Lake Urmiah, in Northwest Persia. Descr.-Rhizome shortly creeping, Leaves linear, a foot long, erect, glaucescent, thick and firm in texture, with a narrow, pale margin. Stem slender, as long as the leaves, bearing a single terminal cluster of flowers. Spathe-valves lanceolate-acuminate, four inches long, pale green, chartaceous. Perianth pale yellow, with a cylindrical tube above the ovary, nearly an inch long; outer segments oblong, emarginated, three inches long; reflexing from near the base, furnished in the lower half with a bright yellow beard; inner segments erect, obovate-cuneate, as long as the outer, rather broader. Ovary distinctly stipitate, clavate, narrowed gradually to both ends, not distinctly ribbed; style-branches convex, an inch broad, the same colour as the perianth; crests large, quadrate, entire,---J.G.Baker"