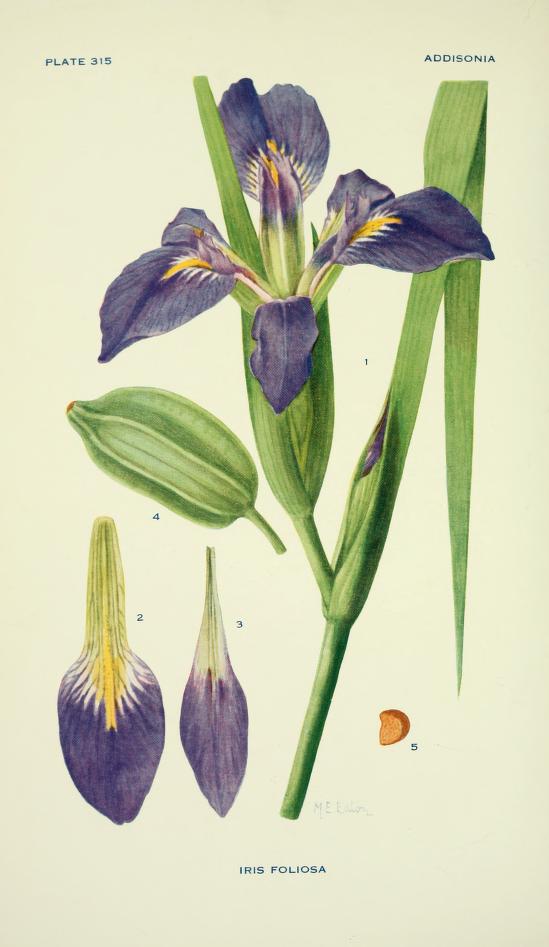 1902, botanical authors Mackenzie & Bush 'Foliosa' (Kenneth Kent Mackenzie and Benjamin Franklin Bush, 1902, Lower Mississippi River valley). Series Hexagonae. 10-12" (25-30 cm) recumbant. This was the name used for Iris brevicaulis before Rafinesque's earlier description was discovered. Small, 1933, distinguished this as a separate species from the other "species" [brevipes, mississippiensis] now combined under the name brevicaulis by its larger leaves that lay on the ground at flowering time and standards with longer, more slender claws. When 'Foliosa' is mentioned in older pedigrees one can assume it is a typical form of I. brevicaulis. Iris brevicaulis Rafinesque. John Kunkel Small wrote about Iris foliosa in ; IRIS FOLIOSA Leafy Blue-flag
Native of the lower Mississippi valley. Family Iridaceae Iris Family. Iris foliosa Mack. & Bush, Trans. Acad. St. Louis 12: 80. 1902.
The proposal of this species of Iris in 1902 marks the second successful attempt to add a species to the genus in the eastern United States, following nearly a century of inactivity in studies in and interpretation of the blue-flags. The plant was really not unknown, even as early as the beginning of the nineteenth century, but it was not botanically named or described.
The present aggregates called Iris foliosa and I. hexagona doubtless had a common ancestor living in the biologic reservoirs of the Appalachian Highlands. After the latest elevation of the continent the plants that descended eastward developed Iris hexagona, while those spreading westward developed /. foliosa. The latter did not become as robust a plant as the former. The leaves are weak, and lie diffuse and more or less decumbent on the ground. The flowers are hidden among the foliage because the flower-stem is decumbent or prostrate. This habit has been brought about, perhaps, by the weight of the flowers and fruits that are borne along the zigzag stem from near the base, instead of merely a flower or two at the top of the stem, as in I. hexagona. Although Iris foliosa has sometimes been considered a variety of Iris hexagona or even conspecific with it, there are structural diagnostic characters in all parts of the flower. The lack of vigor, exhibited by the foliage and the flower-stem, is also evident in the flower itself. For example, while the flower of Iris hexagona with its heavy firm parts will stay fresh for several days, that of Iris foliosa with its evidently frail parts will last a day at the longest.
The type locality of Iris foliosa is Little Blue Tank, Jackson County, Missouri, collected June 6, 1897. The type is in the herbarium of K. K. Mackenzie. The plant grows in dense colonies, in open woods and on prairies, in Ohio, Kentucky, Illinois, Missouri, Kansas, and Arkansas. It is hardy in latitudes north of its natural range. Colonies derived from material sent in by Mr. Mackenzie, and from which the accompanying illustration was made, have flourished in the plantations of the New York Botanical Garden since 1903.
The leafy blue-flag has a stout extensively creeping rootstock. The leaves are numerous, not glaucous, the larger ones sometimes two and a half feet long. The flower-stalk is relatively slender, one and a half feet long or less, decumbent or prostrate, thus usually hidden under copious leaf-growth, markedly zigzag, often strongly so, simple, but bearing flowers at several nodes, usually at short intervals. The flowers are solitary in the axil of the greatly elongate foliaceous subtending bract or two together at the top of the stem. The pedicel is as long as the ovary in anthesis, with six prominent ribs or angles. The perianth-tube is narrowly funnelform, as long as the ovary or shorter. The three sepals are remate, three and a quarter to three and three quarters inches long; the blade is ovate, somewhat longer than the claw, clear violet or bluish, except the white radii on either side of the clear yellow linear crest ; the claw is about one third of an inch wide, whitish green and with deeper green fine striations, changing to pale yellow in the base of the blade. The three petals are mostly spatulate, about 8 cm. long; the blade is slightly longer than the claw, slightly paler than the sepal-blades; the claw is white with few green median striations. The three stamens are an inch and a quarter to an inch and a half long, with the filament about as long as the anther. The three style-branches are narrowly cuneate, an inch and a half to two inches long, about a half inch wide, pale green, except the thin lavender margins and the tip within. The style-appendages are semi-ovoid to ellipsoid-ovoid, an inch and a quarter to two inches long, usually blunt-beaked, with a shallow groove on each face, the angles with two lateral elevated sharp ridges, thus making the capsule unequally six-angled. The mature pedicels are usually less than half the length of the capsule. The seeds, borne in on two rows in each carpel or cavity of the capsule, or in one row in some cavities, are quite corky, semicircular or irregular from mutual pressure, brown, a half inch in diameter or less.
John K. Small.

Your Observations Are Valued. Please make note of bud count, branching, purple based foliage and bloom time, etc. Because these are affected by climate, note date, year and geographic location and write these and other comments in the comment box below.
-- Main.RPries - 2010-01-11