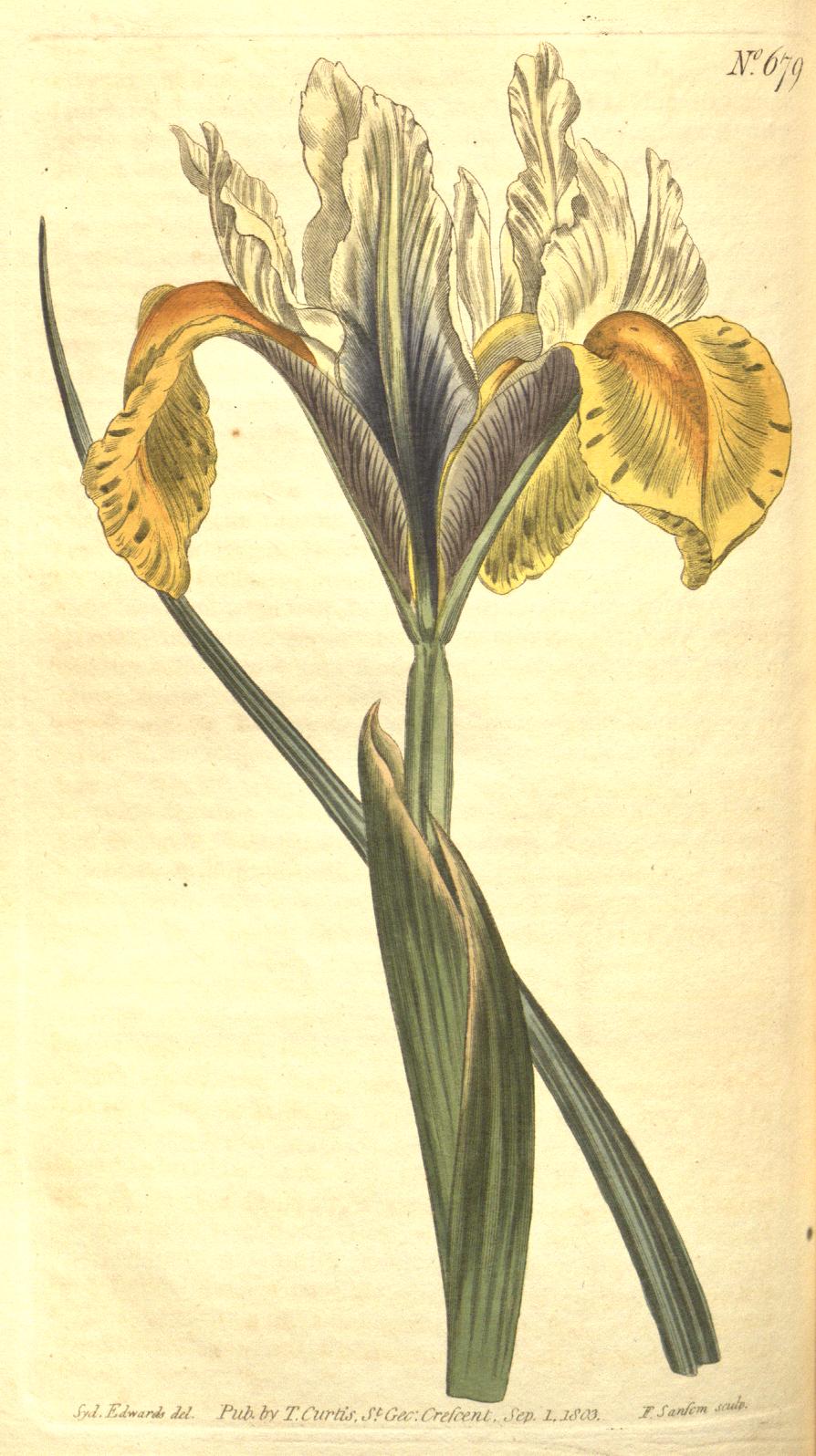 1803, Ker Gawler Iris lusitanica (John Ker-Gawler), Curtis's Botanical Magazine 18: table 679, 1803 Bot. Mag. give the following description: "We regret that the pure yellow variety of this species had not been represented in our plate rather than the present in which a mixture of blue and violet appears, especially as that is the one figured and described in Clusius, by whose cuts it is, as well as Iris Xiphium and xiphioides, excellently characterized; our plant is however Solanders Iris sordida. From Iris Xiphium the closest relative, it differs by having the germen almost completely enclosed within the involucre; in the outer segments being turbinated recurved, not rotately or horizontally so, and in their being rather longer than the inner ones- in having its outer ungues all the way broader than the stigmas, and in these having the keel or ridge far more elevated and enlarged where continued into the lamina; the inner segments are also linear-lanceolate, erect, incurvedly subconnivent, flattish, reflected at their sides, undulate, emarginate, not turbinately divergent, oblanceolate and convolute as in that; nor does the inner lip of the stigmas reach beyond the middle of the lamina, which is recurvedly deflected, whereas in that it is equal in length to about three parts of the lamina.

The flowers are scentless, expanding in June. Agrees in habit and in every thing, except in what is above mentioned, with Iris Xiphium.

Found by Clusius in rich fpots, as well as on rocky hills, near the Tagus above Lifbon.

Quer, in his Flora Espagnol y makes Iris alata of Lamarck (Iris Xipbion 1. and the Iris bulbosa latifolia, sive I. of Clusius) a variety of Iris Xiphium; though to all appearances no two species can be well more distinct; the first, with Iris (nobis Moraea) Sisyrinchium, we were anxious to have laid before the public, as species so well known to all the older Botanists and Gardeners, but which seem now entirely lost to our collections, for upon repeated searches and inquiries we can no where hear of their now being in this country; Parkinson remarks the difficulty of preserving the former (not enumerated in Hort. Kew. though the latter is) and attributes it to tenderness ; which most probably has been the cause of the loss of both. The first is a native of Andalusia, growing in the woods on the Guadiana near Antequera and Cordova, and called by the Spaniards Lirio Espadagnal or Azul; the other is found near Lisbon, where the roots are said to be eaten under the name of Nozelhas; a leiTer plant, supposed to be a variety of the last, is found in Valencia.

If, notwithstanding the information we have received, they should still exist in the collection of any friend to our attempts to illustrate this order of plants, we should be highly obliged by the opportunity being afforded us of describing and figuring them. Both were lately and perhaps still are cultivated in the Botanic Garden at Paris. G.

Note. In giving the specific characters in this genus, we give them as if the plants stood under their different subdivisions; as for instance, the present as placed under that containing species " with bulbous roots " and channeled leaves, &c." otherwise these characteristics should be given in preference to any others. " See Iris xiphium var. lusitanica