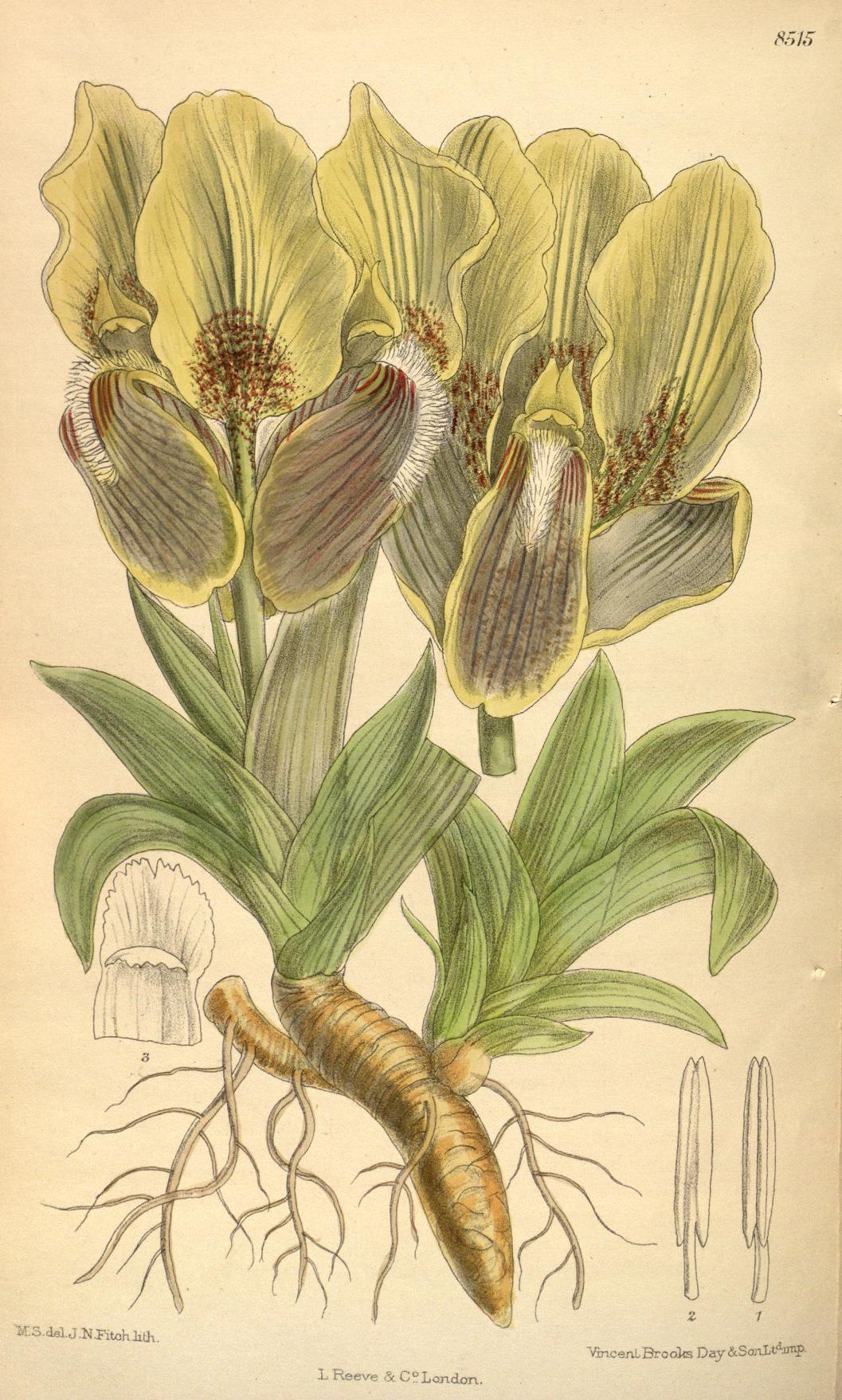 Iris mellita: (Victor von Janka, 1876), in Mathematikai és Természettudományi Közlemémyek. Pest [= Budapest in part] 12: 172. 1876. See Iris suaveolens Reference: Curtis's Botanical Magazine table 8515, 1913 "The charming Iris which forms the subject of our illustration is one for the material of which we are indebted to the Hon. Mr. N.C. Rothschild, who has also presented the plant itself to the Kew Collection. It was obtained in the first instance, so Mr. rothschild informs us, from Mersina in Cilicia. In referring this iris to mellita it will be observed that Dr. Stapf applies the name first applied by Proffessor Janka to a plant from Thrace in such a way as to include the Iris from Asia minor described by Mr. Baker as rubro-marginata, and at the same time yet another plant which fourteen years ago was introduced by the late Mr. Max Leichtlin to European gardens, ostensibly as a native of Western Persia, under the name I. Straussii. In connection with the expression of this more comprehensive view it may be remarked that Professor Velenovsky, whose local knowledge is so exhaustive, admits that I. rubro-marginata, Bak., and I. mellita, Janka, are identical, and that Mr. Dykes, in his recent authoritative review of the genus, does the same. The presence of a purple edging to the leaves and spathes, whence I. rubro-marginata derived its name, is, as Mr. Dykes has pointed out, an unstable feature. Apart from this character the Asia Minor plant, judging from herbarium material, differs from the Thracian form mainly in having somewhat stouter rhizomes and broader leaves, with practically no stems. The plant here figured is, then, a ''rubro-marginata" without any trace of the purple edging. In the specimens of I. Straussii, Leichtl., as cultivated at Kew, we find the broad leaves of I. rubro-marginata but a distinct stem. The Kew plants are from rhizomes communicated by the late Mr. Leichtlin in 1899, the year in which the description of I. Straussii first appeared. Mr. Dykes has stated that more than one species has been put on the market as I . Straussii, he even appears to doubt whether the I. Straussii originally issued by Mr. Leichtlin came from Sultanabad in Persia. As to the latter point it is clear that about 1898 Mr. Leichtlin did receive from Mr. Strauss an Iris from Sultanabad which he named I. Straussii in compliment to its contributor. It is also certain that Mr. Leichtlin distributed specimens of an Iris under that name, and it is certain that the description of I. Straussii in the " Revue Horticole " for 1899 exactly fits the plant sent to Kew under the same name in the same year. The suggestion that the confusion to which Mr. Dykes alludes was created by Mr. Leichtlin at the outset, is not borne out by the evidence at our disposal. If such a confusion arose later on, there is no trace of its existence among the plants sent by Mr. Leichtlin to Kew. So far as existing knowledge goes, these Thracian, Anatolian and Persian plants are not more than forms of the same somewhat variable species. Janka originally described I. mellita as having dull violet or purplish flowers, with a bluish-white beard, Velenovsky has in one passage termed them violet
or greenish-violet ; in another " most often violet but sometimes dull violet, rarely yellowish." The original I. rubro-marginata had uniformly lurid purple flowers ; the I. Straussii of the " Revue Horticole " had brownish and violet flowers. In a drawing made at Kew in 1901 of one of the plants of I. Straussii communicated by Mr. Leichtlin the flowers are brownish-violet, the standards being of a clearer and deeper colour ; the falls and the standards are brownish at the base with just the mottling shown in the yellow form from Mersina now figured. The veining of the claws of the falls and the colouring of the beard also agree, except that the tips of the hairs of the latter are of a deeper blue. The original I. mellita was first collected by Janka in 1871 on dry grassy slopes on Tschiendem Tepe near Philippople in Bulgaria; it has since then been frequently met with throughout southern Bulgaria. The original I. rubro-marginata was described from specimens collected near Scutari by Mr. W. Barbey of Geneva, but it has since been sent to Europe from Smyrna. The plants at Kew received and grown under the name I. Straussii thrive satisfactorily in well-drained loamy soil in a border on the south side of a warm building, where they flower annually but do not ripen seeds.

Description. — Herb, rootstock as thick as the index-finger or less. Leaves densely tufted, ensiform and more or less falcate, at flowering time up to 2^ in. long, over J in. wide, later on elongated, green, smooth, with about 6 slender primary veins on each side. Stem very short or at times up to 4 1/2 in. long, usually 2-flowered, sometimes 1- or 3-fiowered. Spathes herbaceous, remaining green for a considerable time, oblong-lanceolate, acuminate, somewhat swollen, keeled, diverging and displaying the perianth-tube ; the larger up to 2 1/2 in. long. Pedicel very short. Perianth with a greenish tube blotched with red upwards, 1 1/2-1 3/4 in. long, occasionally longer and exceeding the spathes ; outer segments with a deflexed, obovate-oblong, slightly emarginate limb appressed to the tube, 1 1/4- 1 1/2 in. long, 2/3-3/4 in. wide, lurid purple or yellow, with distinct longitudinal veins reddish towards the base ; beard bluish-white ; claw 1-1J in. long, wide cuneate, faintly red-veined ; inner segments erect, wide oblong, suddenly contracted into a red-blotched claw, blade 2 1/4-2 1/2 in. long, 1 1/3 in. wide, lurid purple oryellow, blotched and streaked with red near the base, margin undulate. Stamens with white filaments rather shorter than the whitish anthers. Ovary cylindric, narrowed to the apex, 2/5 in. long; style-arms narrow-oblong, 3/4-1 in. long, pale, crests with obliquely wide-ovate toothed lobes. Capsule 3-gonous, 4 in. long. Seeds sub-globose, deep reddish-brown, rugose.