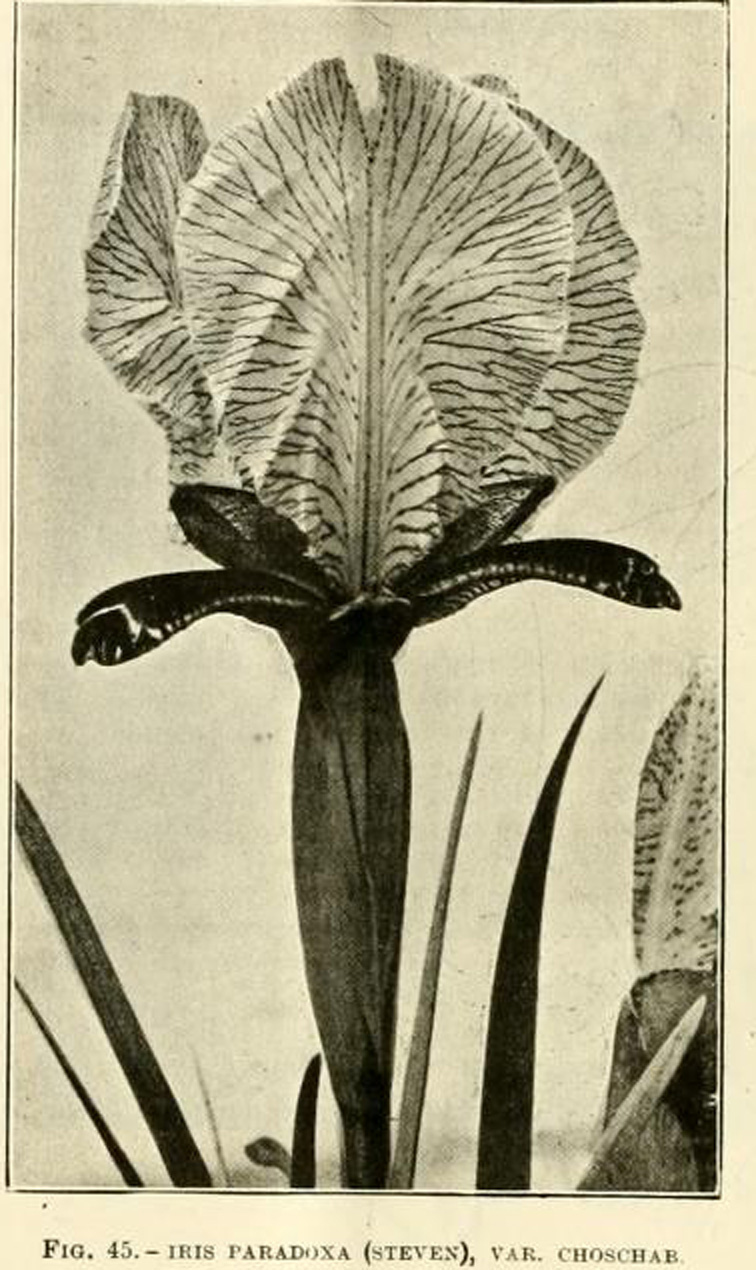 In volume v. of the Memoires de la Society Imperiale des Naturalises de Moscou, p. 355, 1817, the Russian botanist Steven described the quaint Iris paradoxa, and he says that it came from the sunny hills of ancient Iberia, which as one knows lies south-east of the Caucasus. Koch, who cites it in vol. xxi. of Linnea, gives the hills near Elisabetbpol, in the same country, as a locality for it. According to Boissier, it has been found in the district Talysch (south-eastern Transcaspia), in Russian Armenia, and in the Persian province Aderleidsjan. All the published descriptions by the various authors, including the very interesting article of Siemssen on this and other Oncocyclus Irises, in the Botanische Zeitung, 1846, p. 707, as well as all the coloured plates and engravings which have been published of it (see Gartenflora, tab. 386 : the Garden, vol. xxxii , p. 584; and Bot. Mag., tab. 7081), represent this Iris as having the standards coloured purple-violet. I therefore feel justified in giviog a varietal name to a charming variety of this Iris (fig. 45), which Messrs. Van Tubergen of Haarlem, Holland, were lucky enough to obtain from the collector they sent out in 1899 to the botanically almost unexplored region which stretches between the East Armenian town of Van and the lake of Urmiah in North-western Persia. This variety of the originally described violet-coloured Iris paradoxa, was found growing wild near the small village of Cboschab at a considerable height, and although agreeing in every botanical detail with the type, for garden purposes it is abundantly distinct by its milky-white interior petals (the standards), which are delicately though very distinctly veined lilac. It occurs in a region where the winters are long and severe, and as far as the short time it has been in cultivation will enable me to judge, it seems to be more amenable to culture in our climate than such Palestine Oncocyclus Irises as Maria;, atrofusca, and others, which probably can never be expected to become really established in our gardens. John
Hoog, Haarlem, Holland. Dykes 1921 says; "When the flower has been open for about twenty-four hours, the standards lean outwards, and then show two rows of dark violet hairs on the lower part of the haft. Falls, resemble the back of a large bee. The edges of the haft bear thick blackish veins on a dull pink ground, while the whole rest of the surface is covered with short, thick-set black hairs, which stand so closely together as to give the effect of velvet both to the eye and to the touch. The ground color is a pale pink, which appears in a narrow crescent or chevron-shaped patch at the end of the beard, only to be almost entirely obscured again by the velvety black color of the tip of the small blade, which is not separated by any constriction from the broad haft. The standards are very flimsy in texture and bear dotted, blue-purple veins on a silvery white ground. The haft is narrow and veined with brown purple at the base, just above which it bears two central lines of dark violet hairs, one on either side of the central channel. The styles are yellow, closely veined and dotted red-brown, and the small reflexed crests are of the same color."--as described by Dykes in The Gardeners' Chronicle 69: 271. 4 June 1921, Van Tubergen 1901. Iris paradoxa Steven forma choschab (Hoog) Mathew & Wendelbo].

Your Observations Are Valued. Please make note of bud count, branching, purple based foliage and bloom time, etc. Because these are affected by climate, note date, year and geographic location and write these and other comments in the comment box below.
-- Main.RPries - 2010-05-10