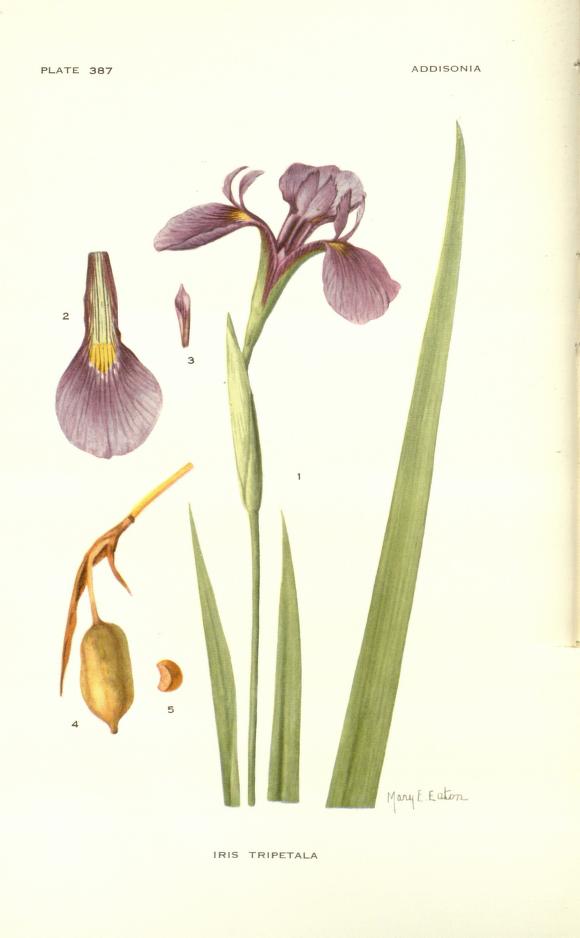 1788, Walter 'Tripetala' (Thomas Walter, 1788) Synonym for Iris tridentata Pursh. Originally described in References: Floral Cabinet 66. 1788; Small in Addisonia gives: IRIS TRIPETALA, Bay Blue-flag
Native of the southeastern United States. Family Iridaceae Iris Family.
Iris tripetala Walter, FI. Car. 66. 1788.
Iris tridenta Pursh, FL Am. Sept. 30. 1814. The environs of the second botanic garden in America contained four species of the genus Iris. At that time, in the early '80s of the eighteenth century, one of these, the violet-iris {Iris verna) had been seen and described by Linnaeus. This species, a small plant, represented one group of the genus Iris. The other three species, larger plants, and all unnamed at that time, each represented a different group. Thomas Walter named two of these, Iris hexagona and the subject of this note. The third species he erroneously referred to a more northern one. This blue-flag still stands alone in its group. Its most prominent character is the relative size of the calyx and the corolla. The petals are very small. It was this character that suggested the specific name to Walter. However, he considered, perhaps inadvertently, the whole perianth to be the corolla and named it with reference to the three large sepals which are so prominent compared with the minute petals of the true corolla. Its coarse- wiry root-stock also distinguishes it from all our southern blue-flags. In its involucre and three-angled pod it is related to the Iris versicolor group.
The modern evidence indicates that the ancestors of this blue-flag advanced from the ancient interior highlands, as the Coastal Plain rose from the sea, along the tributaries of both the Atlantic Ocean to the eastward and the Gulf of Mexico to the southward. However, it, in the lapse of time, not only burned its bridges behind it as it advanced, but even left the immediate vicinity of creeks and river-banks and betook itself to low places in flatwoods, in the vicinity of ponds and ditches where water stands part of the year and at other times remains close to the surface. In migrating, the ancestors of the present plants, passing into the Atlantic Coastal Plain, developed somewhat different offspring from those going to the Gulf Coastal Plain. The form here illustrated may be considered the botanically typical one, for it came from the region of Walter's South Carolina botanical activities. This iris there favors low meadow-like areas adjoining "bays," as pine-barren ponds are there termed; the iris plants occur in great masses in the black boggy soil that surrounds the "bays," with such plants as yellow-flycatchers (Sarracenia) , spider-lilies (Hymenocallis), and other southern bog plants. The shading of violet and yellow on the sepals gives the flower a very soft tone quite different from that of any of our other species. The bay -flag has a long coarse-wiry zigzag or spiral, sometimes partly fibrous coated rootstock. The leaves are usually three to five together, erect, grass-like. The blades are narrowly linear-attenuate, glaucous, especially near the base, at least when young, finely ribbed. The flower-stalk is mostly one to one and a half feet tall, slender, green, zigzag. The flower is solitary at the top of the stem, or sometimes an additional one is borne on a branch from the upper node of the stem, erect, somewhat fragrant. The involucre subtending the flower is narrowly cylindric, two to two and a half inches long, of two main bracts, the inner one about twice as long as the outer or less, acute or mucronate. The pedicel is one and a quarter to one and three quarters inches long, about as long as the hypanthium plus the perianth-tube. The hypanthium surrounding the ovary is bluntly three-angled, green, much shorter than the pedicel. The perianth-tube is obscurely three-angled, slightly dilated upward, quite as long as the hypanthium. The three sepals are arching and drooping, remate, two to three inches long, crest-less. The blade is suborbicular or oval, longer than the claw, violet, varying from pale to dark, paler without than within, except the yellow spot at the base and the white flecks that run off from the yellow. The claw is about one third of an inch wide, greenish within and bordered with violet, flecked or lined all over with violet, without the green is flecked only along the violet edges. The three petals are erect, inconspicuous, about a half inch long, elliptic-lanceolate or oblanceolate, the body contracted into a slender tip, greenish at the base, violet above, with several deeper-colored lines. The three stamens are an inch and a quarter to nearly an inch and a half long, with the filament and the anther about equal in length. The filament is green at the base, violet where it meets the violet-tinged anther. The three style-branches are broadly linear, about an inch and a quarter long, violet, slightly paler at the edges than at the middle. The stigma is entire. The style-appendages are semi-elliptic, curled upward, shallowly toothed above the middle, much over-lapping, deep violet. The capsule is ellipsoid, an inch and a quarter to an inch and a half long, bluntly three-angled or three-sided, with a ridge on each face, shorter than the pedicel. The seeds, borne in two rows in each capsule-cavity, are somewhat corky, semicircular or lunate, about a quarter of an inch in diameter.
John K. Small.