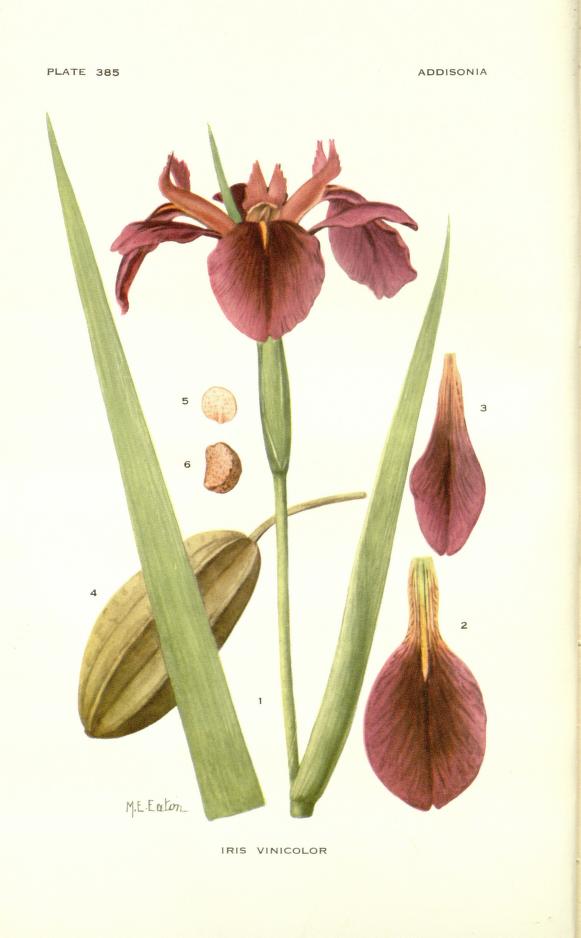 1926, Small Iris vinicolor (John Kunkel Small, 1926) originally described in Addisonia as: IRIS VINICOLOR
Wine-colored Flag. Native of the Mississippi Delta. Family Iridaceae Iris Family
Iris vinicolor Small, sp. nov.
Peninsulas, river-deltas, and mountain peaks are likely places for especially interesting plants. We now know the iris-flora of peninsular Florida fairly well. The opposite may be said of that of the Mississippi River delta. While making a crossing of this delta about the latitude of New Orleans, in the spring of 1925, we fortunately happened there at the time the native iris was in flower. Having studied the Florida iris in the field for several years, we at once noticed the difference in the species. One of the fundamental reasons for the differences is that the Florida plants grow in a soil with silicious sand as a basis, while the Louisiana ones inhabit a sticky marl.
This wine-colored flag was discovered early one April morning in 1925, while driving from the crossing of Lake Pontchartrain to New Orleans, by Edgar T. Wherry and the writer, a few miles south of the original station of Sabal Deeringiana.
The ancestral history of this vinaceous flag is as obscure as that of its geographical associate, the red-flag. At any rate, its ancestors must have had a refuge in the ancient highlands whence they passed into the Coastal Plain. The possibilities within those ancestors conspired through the ages to produce a flower in color quite distinctive from any other of our flags, as is conspicuously evidenced by the accompanying plate. This illustration was made from a plant from the original collection, which survived the winter of 1925-26 in the iris plantation at the Garden. The type specimen is in the herbarium of the New York Botanical Garden. Eastern Louisiana was visited again in the spring of 1926 for observing and collecting living material of Iris. Numerous colonies were found in the low country south of Lake Pontchartrain and in the higher country about Abita Springs. Although we know but little about the flags of the lower Mississippi Valley, we doubt if this species ranges very far inland. The flowers of the blue types are beautiful, those of Iris fulva are odd; those of Iris vinicolor are exquisite. The golden-yellow stripe in the vinaceous-purple sepal lights up the flower in a striking way, especially when seen in the half-shade of the swamps of its native haunts. It also flourishes in the open.
Several hundred flower-stems frequently comprise the colonies in favorable situations. The swamp, not the stream-bank, is the home of this flag. The flower-stems hold the pods erect as they are maturing, but the full-grown pods lie on the ground until the corky seeds fall out and are scattered by rains or floods.
The wine-colored flag has a rather slender but fleshy rootstock. The leaves are erect, mostly three or four together, one to three feet long. The blades are narrowly linear-attenuate, pliable, bright green. The flower-stalk is rather slender, mostly taller than the leaves, often with one or two short branches. The flowers are solitary or two together at the top of the stem. The involucre consists of two main bracts, the longer one attenuate and exceeding the flower. The pedicel is shorter than the ovary. The hypanthium covering the ovary is six-angled, green. The perianth-tube is cylindric, nearly as long as the ovary in anthesis. The three sepals are remate, two and a half to three inches long, spreading and somewhat recurved, vinaceous purple within and without, copiously but obscurely veined with darker forking lines, with the crest of the claw extending up into the base and there golden-yellow or more yellow than in the claw and with more or less purple-black about the tip of the crest and a line of purple-black running up into the middle of the blade. The claw is shorter than the blade, yellowish green, veined and flecked with red-purple. The three petals are somewhat shorter than the sepals, spreading, spatulate, mainly vinaceous-purple, paler without than within. The blade is deep vinaceous purple within, with a few forking darker lines. The claw is greenish yellow striate — pale and dark — and a greenish or darker line runs to the tip of the blade. The three stamens are an inch to an inch and an eighth long. The filaments are green, except the yellowish base. The anthers are ochroleucous, longer than the filaments, slightly tapering to the apex. The style-branches are an inch to an inch and a quarter long, linear-elliptic, or slightly broadened upward, concave, green and purple-tinged without, reddish purple except the pale margins, and with a sharp median ridge within. The style- appendages are erect and somewhat recurved, nearly or quite a half inch long, half-deltoid or half-ovate, acute, finely erose-toothed, vinaceous purple. The stigma is two-lobed. The capsule is ellipsoid to ellipsoid-obovoid, two to three inches long, drooping, bright green, six-angled, the angles sharp, the walls rather thick. The seeds are borne in one row in some of the capsule-cavities, in two rows in others, thus they are either circular or half -circular, brown, very corky and roughened.
John K. Small. See below: