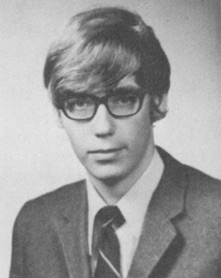 One of Region One's hardest-working irisarians, Kevin Vaughn, will graduate from high school this year[1972], and we will miss him while he is away studying, as he now plans, to be a psycho-geneticist. Besides his iris interests, Kevin has played the oboe and Eb clarinet in his school band for four years, and this year was recommended for All-State Band. He is President of the Honor Society, and a four-year delegate to the State Model Congress, where this year he will sponsor a bill to ban food additives. He has been breeding Sempervivums since 1965 and has named 21. Kevin's first iris registration, MISS PERKY, is an amoena miniature dwarf, but he specializes principally in Siberians and MTB. He has recently added a collection of Louisiana irises. He has established a Siberian Display Garden, and in 1971 directed an excellent judges' training session for the region, in table irises. In 1970 and 1971 he arranged for the first ever auctions of apogon irises, with morning program and picnic lunch, and served with aplomb as auctioneer.¹ Registrations/introductions: