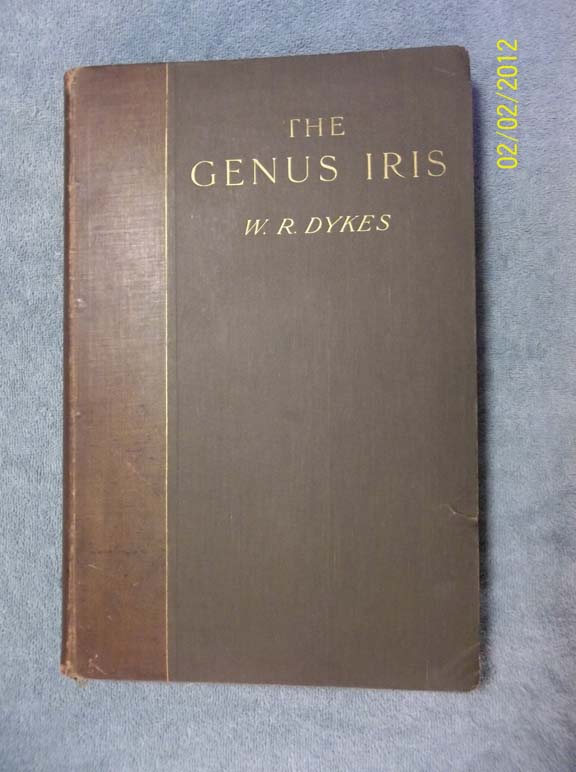 History of The Dykes Monograph:

In 2013 we will be celebrating the 100th anniversary of the publication of the most important written work in the history of iris, William Rickatson Dykes' The Genus Iris. To understand its significance one needs to understand the world leading up to its publication.

In 1890 the USA had conquered the American West. The frontier was gone, and America was suffering an identity crisis. The natural world had been not only tamed, but decimated. The great herds of bison, and flocks of passenger pigeons, whooping cranes, etc. were disappearing. Even hunters like Teddy Roosevelt could sense a need to save and understand the wilderness and wild species.

However, in England the conquest of the British Empire was still going forth. The Royal Botanical Gardens was being overwhelmed by botanical trophies from this vast Empire. Joseph Dalton Hooker, and later John Gilbert Baker, as keepers of the herbarium were seeing a huge increase in our knowledge of natural history. These professional botanists worked with amateur gardener/scientists to help in the overwhelming tasks of studying the massive collection of specimens.

The first great Iris gardener/scientist was Michael Foster (1836-1907). Foster was a physician and professor of human physiology. He literally wrote the text that was used for many years in that field. Amazingly, he also found time to garden. He made careful observations of new species that were pouring into England. He published, sometimes weekly, his thoughts on Iris in The Gardeners Chronicles. It is hard to say which was more important, his work in human physiology or his study of Irises. He received a knighthood, probably for both. A young protégé of Sir Michael Foster was William Rickatson Dykes (1877-1925). Like Foster he grew plants in his garden, making careful observations and recording them in the same journals. He also was a gardener/scientist. One wonders how he as headmaster of a school for boys could find all the time, but somehow he did. Dykes continued the work of Foster, going even further, seeing more species, and writing extensively.

By 1912 Dykes had assembled in his monograph, The Genus Iris, all the knowledge of Iris that was in the literature and added much more of his own.

It is worth emphasizing the fact that he was not a scientist as we think of today who is paid for doing his research. Iris was an avocation, a labor of love. Interestingly, for almost the last hundred years it has been the gardener/scientists who have done the most to further iris information: George Rodionenko, Fritz Kohlein, and Brian Mathew. There is still much to be learned, and gardeners can still contribute with careful observations.

When we speak of a monograph, we are speaking of one work where all the known knowledge is assembled. Dykes did this so well, most subsequent works have not repeated to this degree. The British Iris Society's Species Guide to Iris is today's monograph, but for almost 80 years nothing came close. Despite the fact that Dykes only knew half the species we know today, his work is mandatory reading for the serious student of irises. About a dozen of the plants he knew as species are now considered natural hybrids or subspecies. Even categories, that are now, no longer used in today's taxonomy, are commonly used descriptors by irisarians, such as Apogon, Evansia, and Eupogon. His guidance in cultivation still is useful and the gorgeous plates of iris paintings that graced the work are still much admired. It is a wonderful chance that an original copy of this limited edition has become available on the 100th anniversary of publication of The Genus Iris.

At the American Iris Society Convention 2012 in mid-April in California a copy bequeathed to the Aril Society International by long time director Francesca Thoolen will be was e auctioned. Don't miss this opportunity to own this original edition of a landmark publication in the Iris world"

Another chance; Check e-bay September 1st 2013 for another copy.