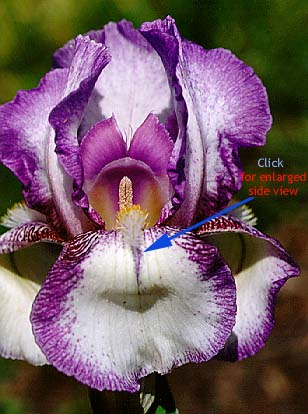 To immediately dispel any thoughts of sorcery invoked to bring about the one original basic change from which all forms of horned iris have since evolved, let me explain at once the simple manner in which the first horned iris came about. The rudimentary beginnings of a horn first appeared among the seedlings of the late Sydney B. Mitchell, at Berkeley, California. The cause is uncertain, but most likely the first slight projection at the end of the beard represented a mutation brought about by the forces of nature, possibly radiation of some kind. And if so, these space-age iris may perhaps trace their origin right back to bombardment with radiation from interstellar space.

Be that as it may, the fact remains that it was in May, 1944, in the garden of Professor Mitchell, that I first observed this phenomenon on his ruffled plicata seedling No. M-5-38. This was two years before I issued my first iris catalog, and before I even had an iris garden. As Professor Mitchell was not interested in working with this apparent sport, he kindly allowed me to use it in my first iris hybridization experiments. I selfed it and crossed it with eight of his other plicata seedlings, none of which had any signs of horns. The resultant seeds were sowed that fall in my first iris seedbeds at Placerville, in the mountains of northern California. Thus began my initial efforts to intensify and extend the horns sufficiently to become decorative features.

Most of the seedlings from these crosses bloomed in 1946, and among them all there was only one that had the beginnings of horns. This came from one of the 37 seeds resulting from the selfing of Mitchell's No. M-5-38, which he introduced in 1945 as ADVANCE GUARD. [Lloyd Austin 'Controlled Evolution of the Horned, Spooned, and Flounced Iris', A.I.S. Bulletin 161(April 1961): 43-44.]

*Please do not enter images that are not your own without owners' permission, this is against Wiki policy*