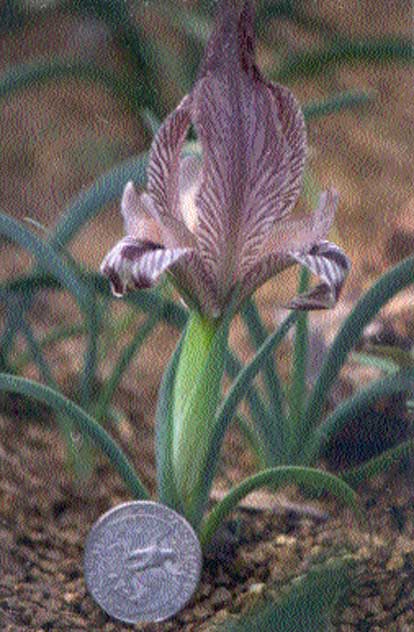 1831, Botanical author Carl Anton Meyer Iris acutiloba Mey. (Carl Anton Meyer, 1831, Transcaucasia); Dwarf, Section Oncocyclus, height 6-12" (15-30 cm); Although we have followed Mathew and included lineolata as a subspecies of acutiloba many botanists in Russia and Turkey would still argue that these are separate species. It is said that lineolata is more rhizomatous and typical acutiloba more clump forming. There is also a disjunct in distribution with lineolata an Iranian plant and acutiloba occuring in the Transcaucasus North of the River Kura. Also the typical acutiloba Has two blotches one in the center of the fall and one near the tip of each fall. This form was named bimaculata. Single blotch specimens are also said to exist but it is unclear that these are separate from lineolata. See below:

Classification
Iris acutiloba Mey Several color forms of lineolata exist with creamy or yellow markings but the usual forms are with creamy white ground color but more or less heavily veined purple-brown; Falls usually reflexed especially in typical acutiloba, but in some forms, especially lineolata, they are spreading horizontally, with a conspicuous reddish brown spot for a signal area at the entrance to the pollen tunnel formed by the style arms. The beard of short brownish hairs; Standards larger than falls and pointed, Style greenish dotted brown; filaments and anthers green. From the specimens I have seen subspecies acutiloba is a smaller plant, whereas lineolata is larger. Both seem rather easy to grow in pots in an alpine house, following typical Oncocyclus culture. The color variations are very interesting and one could make an interesting collection of these plants. Since they grow in more mountainous areas, they are much cold hardier than some of the Israel-Palestinian Oncocyclus. ---Robert Pries Iris Encyclopedia ----

Iris acutiloba has also produced the following hybrids; And the following cultivars have I. acutiloba as a grandparent; 'Aril Sanctum'. 'Darling Who Knows' 'Kazakhstan'; 'Rojen's Saga'. ---- ----

Your Observations Are Valued. Please make note of bud count, branching, purple based foliage and bloom time, etc. Because these are affected by climate, note date, year and geographic location and write these and other comments in the comment box below.
-- Main.RPries - 2009-11-04