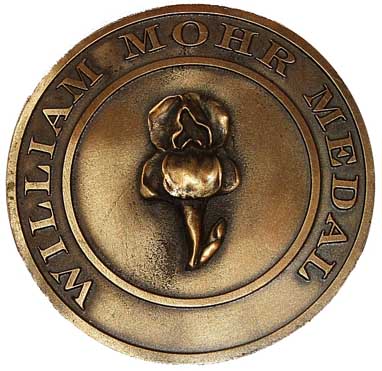 The highest award given by the American Iris Society strictly to Arilbred Irises with less than 1/2 Aril content.

This medal is restricted to irises of one-quarter or more aril content that do not meet the more restrictive requirements of the Clarence G. White Medal. It is named in honor of William A. Mohr (1871-1923).

William Mohr was born on a 400-acre ranch near Mount Eden, California. He lived and worked on the ranch all, his life. Mohr's interest in plants began in his childhood, and he not only imported many plants but also grew different many plants from seed. He hybridized almost everything he grew. He developed hybrid strains of wheat and his neighbors bought their seed from Mohr. He developed new strains of polyanthus, tulips, clematis, lilies, and many bulbous plants.

About ten years before his death, Mohr began working with irises. He obtained the tetraploid Asiatic species, as well as regelia and oncocyclus irises, and communicated with other iris hybridizers such as Grace Sturtevant and Samuel Stillman Berry. He grew thousands of seedlings, including reglio-cyclus, regalia, and oncocyclus crosses with pogonirises, and all classes of bearded irises. He also hybridized spuria irises and made crosses between Siberian irises and Pacific Coast native irises. 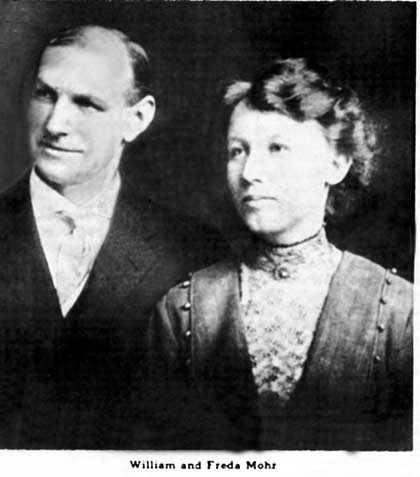 William Mohr and his wife were killed in 1923, when an express train hit their car. He never knew the fame his irises would ultimately achieve. His wonderful new irises could have been lost had it not been for his friend, Professor Sydney B. Mitchell, who saved his irises and continued his work. Only a few of Mohr's irises were registered at the time of his death, including 'Balboa' and the arilbreds 'Bellorio' and 'Carmelo'. After Mohr's death, Sydney Mitchell introduced a number of Mohr's most outstanding seedlings; these are shown in the 1939 Check List as "MohrMitchell" introductions. Some of these outstanding cultivars are 'Purissima', 'Santa Barbara', 'Conquistador' and 'Marian Mohr'.

The two greatest achievements of William Mohr's hybridizing programs are probably his plicatas and his innovative and beautiful arilbreds. His great plicatas are 'Los Angeles' and the iris that won the first American Dykes Medal, 'San Francisco'. Mohr's most important arilbred iris is the magnificent 'William Mohr'.

The medal honors William Mohr, one of the first experimenters in arilbred breeding during the early decades of the 1900s.