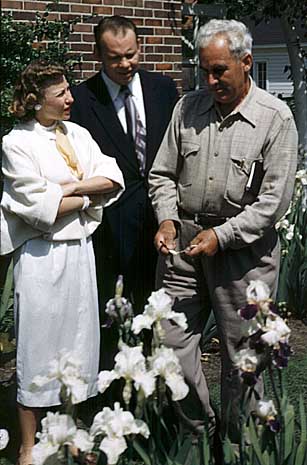 HARRY J. RANDALL Instituted in 1926 in recognition of Sir Michael Foster's "achievements and assiduous efforts in collecting and hybridizing irises," the Plaque is reserved for special personal awards to those contributing to the advance of the genus.
....Fourteen years ago the late Junius Fishburn of Virginia, a fine judge of irises, in a letter to me, wrote, "You must watch Orville Fay. He will surely go places." The instruction has since been carried out and the prophecy fulfilled. Orville Fay has become one of the most successful hybridizers in the world, his introductions have received the highest awards, and amongst his latest seedlings are several which, in their respective colour-classes, promise to set new standards of excellence. In awarding him the Foster Memorial Plaque our Society is honouring a man of imagination and skill and is again recognizing the debt we owe to our leading hybridizers.
Orville Fay started his serious work amongst irises 27 years ago, determined to produce a white variety which would be winter-hardy in Chicago. He succeeded with K ATHERINE F AY, and from that modest beginning he extended his activities and diligently studied genetics. He was amongst the first to realize the importance of S NOW F LURRY as a parent, and because of its parentage he bought a root before he ever saw it flower. Over the years he has furnished proof that sustained success in hybridizing is not achieved by slapdash pollinations but by the most carefully thought out long-term programmes. In 1945, for example, he set out to produce a really high-class white iris with a bright red beard, and he predicted that he would have to raise five generations of seedlings over a period of 10 years. In 1955 he flowered a row of 200 white seedlings with red beards, one of which, since named A RCTIC F LAME, is regarded by him as his finest achievement.
....It is not the purpose of this appreciation to list all the Fay introductions, but mention should be made of a few of those which have won world-wide fame. DESERT SONG, though raised in 1942, is still almost supreme amongst soft yellow irises. NEW SNOW and CLIFFS OF DOVER are outstanding whites, and IRISH LINEN will probably equal them in public favour. Other excellent varieties are BLACK HILLS and TOTALE CLIPSE, both very dark; BLUEBIRD BLUE and GALILEE, light blue; FLEETA and NATIVE DANCER, pink; ZANTHA and WAXING MOON, yellow. With only one exception all his introductions have received important awards, and he is among the small group of hybridizers who have twice won the Dykes Medal, doing so with TRULY YOURS and MARY RANDALL. A glance at the Popularity Poll in America or at the exhibits of irises at Chelsea or Vincent Square shows how widely grown are his introductions.
....Has he reached the end of the hybridizer's road? My own prediction is that within the next decade he will surpass his previous successes. He hopes to raise a really red iris with a red beard, together with irises of various colours which will have larger and more strikingly coloured beards. Already he has whites with bushy, red beards, broad-petalled blue-blacks with beards to match, brown-blacks with brown beards, cool pinks with "shocking pink" beards, orange varieties with coral beards, and so on. He also has seedlings with ice-blue standards, white falls and white beards; and other exciting combinations can be expected.
....In addition to his work amongst irises Orville Fay has bred daffodils and peonies, and he is now engaged on important breeding with hemerocallis, turning diploids into tetraploids and thereby improving the genus in various ways. He sets himself a remarkably high standard and discards many seedlings which, in other hands, would be hurriedly named and introduced. A very likable person, who delights to give help and encouragement to other and younger hybridizers, Orville Fay richly deserves the honour we have paid him. 1 Reprinted by special permission from The Iris Year Book, 1959, published by the British Iris Society. Orville Fay was honored by the American Iris Society with its Hybridizer Award in 1952. List of registrations/introductions: Arilbred: 'Mohr Pink', R.1953. Border Bearded: 'Nursery Rhyme', R.1965, 'Toy Shop' 1966. Tall Bearded: 'Arctic Flame' 1960, 'Arctic Skies' 1960, 'Beautiful Morn', R.1963, 'Big Game' 1953, 'Black Hills' 1951, 'Black Jade', R.1962, 'Black Swan' 1960, 'Bluebird Blue' 1953, 'Bridal Satin', R.1952, 'Butterfly Blue' 1952, 'Cashmere' 1959, 'Champagne Music' 1964, 'Chinese Coral' 1962, 'Chinese Lantern' 1957, 'Cliffs of Dover' 1953, 'Dark Splendor' 1961, 'Desert Song' 1946, 'Egyptian Buff', R.1948, 'Esther Fay' 1961, 'Fire Dance', R.1947, 'Flaming Dragon' 1966, 'Flaming Heart' 1963, 'Fleeta' 1956, 'Galilee' 1956, 'Golden Plunder' 1966, 'Gold Medal', R.1944, 'Good And Plenty' 1952, 'Gulf Stream' 1946, 'Irish Linen' 1958, 'Katharine Fay' 1943, 'Kingdom' 1964, 'Lady Naomi' 1941, 'Lake Breeze' 1944, 'Lipstick' 1957, 'Mary Randall' 1951, 'Morning Breeze' 1963, 'Native Dancer' 1954, 'New Arrival' 1960, 'New Horizon' 1946, 'New Snow' 1946, 'Northbrook' 1959, 'Orange Chariot' 1964, 'Orange Majesty', R.1964, 'Pale Dawn', R.1946, 'Paratrooper', R.1944, 'Pink Cameo' 1946, 'Pink Cloud', R.1945, 'Radiant Light' 1965, 'Red Lance' 1961, 'Rippling Waters' 1961, 'Spring' 1968, 'Spring Valley' 1959, 'Total Eclipse' 1956, 'Tranquility' 1950, 'Tripic Isle' 1965, 'Truly Yours' 1949, 'Twilight Sky', R.1948, 'Vast Horizon', R.1962, 'Waxing Moon' 1957, 'Wintergreen', R.1955, 'Zantha', R.1947. -- Main.RPries - 2012-05-18